Alex Bojanowski at Germany’s online Der Spiegel reports here on a new paper appearing in Nature that shows climate change in the 1970s was caused by ocean cooling. Climate simulation models once indicated that the cooling in the 1970s was due to sun-reflecting sulfur particles, emitted by industry. But now evidence points to the oceans.

I don’t know why this is news for the authors of the paper. Ocean cycles are well-known to all other scientists. The following graphic shows the AMO 60-year cycle, which is now about to head south. 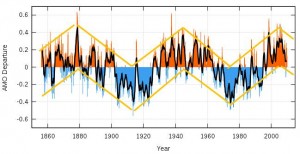 Computer models simulating future climate once predicted that it would soon get warm because of increasing GHG emissions, but, writes Der Spiegel, citing Nature:

Now it turns out that the theory is incomplete. A sudden cooling of the oceans in the northern hemisphere played the decisive role in the drop of air temperatures.

A huge amount of energy was taken out of the oceans. The scientists said that it was surprising that the cooling was so fast.

This shows, again, that the climate simulation models used for predicting the future are inadequate. It’s not sure what caused the oceans to cool. But scientists are sure that aerosols were not the cause. Der Spiegel describes a possible scenario how the oceans may have cooled:

Huge amounts of melt water from Greenland’s glaciers poured into the Atlantic at the end of the 1960s, and formed a cover over the ocean. The melt water cooled the ocean for one thing, and acted to brake the Gulf Stream, which transports warm water from the tropics and delivers it to the north. The result: the air also cools down.

But, as Spiegel reports, that hardly explains why there was also cooling in the north Pacific. Der Spiegel:

The scientists will have to refine their climate simulations. The new study shows one thing: The influence of the oceans is greater than previously thought.

I’d say that’s a very polite way of saying: Your models have been crap, and it’s back to the drawing board. This time don’t forget to properly take the oceans and every thing else into account. Yes, there’s a quite a bit more to climate than a single trace gas in the atmosphere. Hooray – the warmists are finally beginning to realize it! (Maybe)

26 responses to “Der Spiegel: The Ocean’s Influence Greater Than Thought”