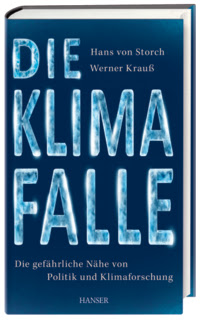 Yesterday I wrote about Hans von Storch’s and Werner Krauss’s new book: “The Climate Trap – the dangerous proximity of politics and climate science”.

There is already some reaction to the book, which is scheduled to be released on February 25…a little over a year since Fritz Vahrenholt and Sebastian Lüning dropped their bombshell “Die kalte Sonne“ (The Cold Sun), which tells us claims of a coming climate catastrophe are unfounded.

The climate conferences have ended in failure and achieved no consequences, even though emissions continue rising. Climate scientist Hans von Storch and cultural scientist Werner Krauss explain how we ended up in the climate trap – and how we can get out of it. The inflationary announcements of the climate catastrophe led to a loss of credibility in science. Climate change is not a scientific question, but a societal one. It has to be anchored regionally in culture, every-day life, and politics. Global society does not need any politicized science calling for a 2°C target. Instead it needs a science that fathoms the conditions for a pragmatic approach to climate change.”

If it indeed annoys the alarmists, which I’m sure it will, then very few “deniers” will be annoyed at all by it. We can take criticism.

Hans von Storch is a pioneer in climate modeling and one of the cool-headed voices on the subject. For years he has been dealing with the role of climate scientists, and has sharply criticised that some of them have attempted to drive policy with their research results. Together with cultural scientist Werner Krauss, he is calling for a clear designation of roles: Climate scientists should concentrate on physics and make themselves available to policymakers as ‘honest brokers’.”

Hans von Storch doesn’t call for an immediate meteorological state of emergency whenever a snowstorm does not allow itself to be stopped by all the chicanery of environmental law. The realists among the climate scientists are not guaranteeing good weather, but are guaranteeing clear views.”

Again there are lots of indications the book has plenty of harsh criticism aimed at the alarmist scientists who are trying to shape politics. Step by step, voices are speaking out against unfounded climate catastrophism in Germany.