Long-term (decadal and even centennial-scale) volcanic influence on climate has recently gained more and more attention in the scientific literature.  Previously thought to influence surface temperatures for only a few years at a time, there is now a growing body of evidence suggesting volcanic aerosols may significantly affect both short and long-term climate changes by blocking solar radiation from heating the oceans’ surface waters.

When specifying the factors contributing to decadal and centennial-scale temperature changes, solar activity and greenhouse gases are usually thought to top the list. And since 93% of the heat from global warming ends up in the oceans (IPCC, 2013), the focus necessarily should be on what mechanisms contribute most to variations in ocean heat content (OHC) and sea surface temperatures (SST).

Back in 2013, Rosenthal et al. published a paper in Science on millennial-scale ocean heat content variations (Pacific). As the graph (Fig. 4B from the paper) below illustrates, the authors document a dramatic cooling of the 0-700 m layer between the Medieval Warm Period (~1000 CE) and Little Ice Age (1600-1800 CE). While OHC has risen since the depths of the Little Ice Age, modern ocean temperatures are still significantly cooler (-0.65°C) than what they were just 1,000 years ago, or during the Medieval Warm Period. 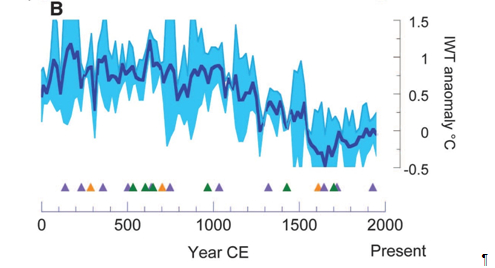 The causal explanation for this dramatic ocean cooling during the last millennium has generally not been forthcoming from those who attribute variations in temperature/heat content predominantly to variations in carbon dioxide. After all, there was essentially no change in atmospheric CO2 concentrations (which centered around ~275 ppm) between ~1000 CE and 1600-1800 CE, implying that CO2 forcing cannot explain the long-term changes in OHC.

There are literally hundreds of scientific papers that have been published suggesting that tracts of low solar activity (i.e., Oort, Spörer, Maunder, Dalton Minimums) are well correlated with decadal- and centennial-scale cooling periods. It is also well-documented that the Medieval Maximum and Modern Grand Maximum (~1920 to ~2010) of very high solar activity are well correlated with the last two warm periods. However, the solar activity explanation is deemed quite controversial, as it is presumed that long-term variations in the Sun’s energy output are too small to have a significant impact on climate changes.  So as not to veer off track or stumble through this controversy, a more indirect explanation for global warming and cooling trends is succinctly referenced here.

In 2015, the authors of the Pages2k (2013) “global” temperature reconstruction for 0-2000 CE released their Ocean2k record of sea surface temperatures (SST) entitled “Robust global ocean cooling trend for the pre-industrial Common Era“.  Below is the definitive graph from the paper depicting this robust global ocean cooling (which conspicuously conceals the post-1900 SST record). The paper itself indicates that the 1,000-year (kyr) cooling trend for global ocean temperatures changed by a modest ~0.1°C (from about -0.45°C kyr to -0.35°C kyr) with the inclusion of the 1800 to 2000 (“anthropogenic”) SST record:

While intriguing that the authors of the Ocean2k reconstruction effectively acknowledge that global ocean surface temperatures haven’t fallen out of the range of long-term natural variability when including the last ~200 years, even more interesting is the physical mechanism suggested for this long-term ocean cooling: a centennial-scale decrease in surface incident solar radiation (SSR) via the aerosol dust-veiling effects of “explosive volcanism.”  Here is the summary from the paper’s abstract:

Climate simulations using single and cumulative forcings suggest that the ocean surface cooling trend from 801 to 1800 CE is not primarily a response to orbital forcing but arises from a high frequency of explosive volcanism. Our results show that repeated clusters of volcanic eruptions can induce a net negative radiative forcing that results in a centennial and global scale cooling trend via a decline in mixed-layer oceanic heat content.”

Large volcanic eruptions can have major impacts on global climate, affecting both atmospheric and ocean circulation through changes in atmospheric chemical composition and optical properties. The residence time of volcanic aerosol from strong eruptions is roughly 2–3 y. Attention has consequently focused on their short-term impacts, whereas the long-term, ocean-mediated response has not been well studied. Most studies have focused on tropical eruptions; high-latitude eruptions have drawn less attention because their impacts are thought to be merely hemispheric rather than global. No study to date has investigated the long-term effects of high-latitude eruptions. Here, we use a climate model to show that large summer high-latitude eruptions in the Northern Hemisphere cause strong hemispheric cooling, which could induce an El Niño-like anomaly, in the equatorial Pacific during the first 8–9 mo after the start of the eruption. The hemispherically asymmetric cooling shifts the Intertropical Convergence Zone southward, triggering a weakening of the trade winds over the western and central equatorial Pacific that favors the development of an El Niño-like anomaly. In the model used here, the specified high-latitude eruption also leads to a strengthening of the Atlantic Meridional Overturning Circulation (AMOC) in the first 25 y after the eruption, followed by a weakening lasting at least 35 y. The long-lived changes in the AMOC strength also alter the variability of the El Niño–Southern Oscillation (ENSO).”

The conclusion that explosive volcanic eruptions – or clusters of smaller eruptions spaced closely together – could have a significant long-term effect on climate is not a new one. Back during the 1960s and 1970s, when scientists were searching for an explanation for the decades-long -0.3°C global cooling trend and its possible connection to droughts and severe weather events, volcanic climate forcing was often recognized as significantly responsible (Benton, 19701; Mitchell, 19702; Budyko, 19693). It was also usually acknowledged that the proportion of human contribution to atmospheric aerosol loading was small (~10%) relative to the predominance of volcanic aerosols (Mitchell, 1970; Cobb, 19734).  More recently, scientists have also confirmed that volcanic eruptions are the  primary source of increases in stratospheric aerosol, and that “no hint for a strong anthropogenic influence has been found” (Neely et al., 20135; Höpfner et al., 20136 ).

Further strengthening this correlation between the presence or absence of volcanic aerosols and long-term cooling or warming trends, consider this key graph taken from Oliver (1976) below (Fig. 1, page 2). 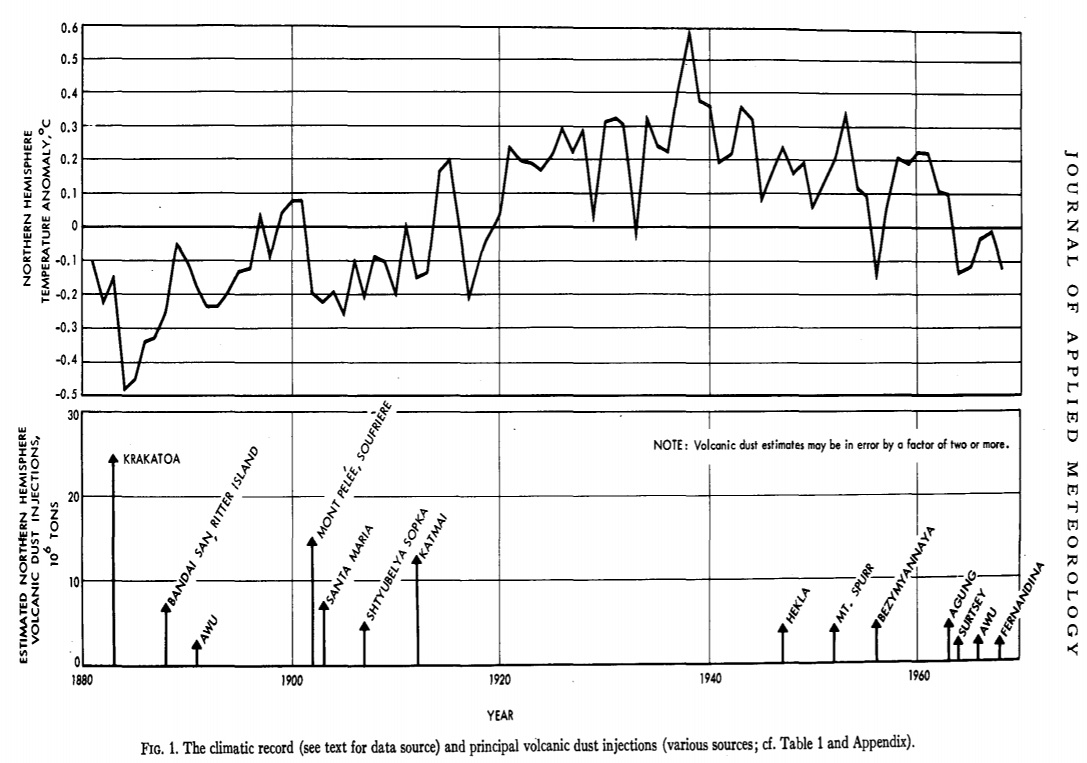 A period of several decades existed (~1915-1945) in which volcanic activity was unusually light and, as mentioned earlier, the temperatures were higher than the preceding [1880s to 1910s] or, in fact, the subsequent (current) [1950s-1970s] period. … Numerous possible causes of climate change have been discussed in the literature, including both anthropogenic and natural factors. Two principal anthropogenic sources are often considered: changes in atmospheric carbon dioxide and changes in tropospheric dust. … Mitchell (1975) concluded that neither tropospheric particulates [anthropogenic pollution] nor atmospheric CO2, in concert or separately, could have accounted for the major part of the observed temperature changes of the past century.”

This explanation could account for the ocean temperature changes since the 1880s far better than anthropogenic CO2 emissions can. After all, anthropogenic CO2 emissions were flat and low (~1 GtC [gigatons carbon] per year) during the 1915 to 1945 warming period, and they rose dramatically (up to ~5 GtC per year) between the 1940s and 1970s.  This means that as CO2 emissions increased significantly, surface temperatures cooled significantly (1940s to 1970s) – the opposite of what should have been occurring if rising CO2 emissions are largely responsible for global warming.

There are 54 large explosive volcanoes during 501–2000 AD in total, and the strongest one is the Samalas volcano in 1257–1258, which is followed by three smaller eruptions in 1268, 1275 and 1284. These strong volcanoes do not allow the climate to recover, and might have triggered the Little Ice Age.”

Instead of asking what factors are contributing to ocean warming on decadal and centennial time-scales, perhaps there needs to be more of a focus on answering the question of what factors have contributed to the periods of ocean cooling during the last millennium.

Variations in CO2 concentrations or anthropogenic CO2 emissions cannot effectively explain the long-term cooling of the oceans (about -0.35 C per 1,000 years for the last 2,000 years per Ocean2k ). On the other hand, explosive volcanism and its dimming effect on surface solar radiation can much more readily explain decadal- and centennial-scale cooling and warming phases with both its presence (cooling) and absence (warming).

“Climate is variable. In historical times, many significant fluctuations in temperature and precipitation have been identified. In the period from 1880 to 1940, the mean temperature of the earth increased about 0.6°C; from 1940 to 1970, it decreased by 0.3-0.4°C. Locally, temperature changes as large as 3-4°C per decade have been recorded, especially in sub-polar regions.  … The drop in the earth’s temperature since 1940 has been paralleled by a substantial increase in natural volcanism. The effect of such volcanic activity is probably greater than the effect of manmade pollutants.”

“[V]ariations of human-derived loading are an order of magnitude less than those of volcanic dust loading. For reasonable estimates of the thermal cooling effect of dust load increases, it is inferred that secular cooling due to human-derived particulate loading is currently of the order of 0.05°C per decade. Although changes of total atmospheric dust loading may possibly be sufficient to account for the observed 0.3°C-cooling of the earth since 1940, the human-derived contribution to these loading changes is inferred to have played a very minor role in the temperature decline.”

“[A] rise in temperature that began at the end of the last century stopped in about 1940, and a fall in temperature started. The temperature in the northern hemisphere that increased in the warming period by about 0.6oC then decreased by the middle of the fifties by 0.2oC.  A comparatively short-period rise in temperature with smaller amplitude was also observed in the last years of the [19th] century. … Thus, it seems probable that the present changes in the Earth’s temperature are determined mainly by the atmospheric transparency variations that depend on the level of volcanic activity.”

“It has been estimated (Squires, 1966; Selezneva, 1966; Hidy and Brock, 1970; Robinson and Robbins, 1970) that the anthropogenic component of the global particulate burden of the atmosphere amounts to 5-12%; not, it would seem a very alarming figure.”

“We employ model runs that include the increases in anthropogenic sulfur dioxide (SO2) over Asia and the moderate volcanic explosive injections of SO2 observed from 2000 to 2010. Comparison of the model results to observations reveals that moderate volcanic eruptions, rather than anthropogenic influences, are the primary source of the observed increases in stratospheric aerosol.”

“The increase in the stratospheric aerosol concentration observed in the past years is caused mainly by sulfur dioxide from a number of volcano eruptions. Variation of the concentration is mainly due to volcanoes.  Lower stratospheric variability of SO2 could mainly be explained by volcanic activity and no hint for a strong anthropogenic influence has been found.”

“Explosive volcanism resulting in stratospheric injection of sulfate aerosol is a major driver of regional to global climatic variability on interannual and longer timescales. Thirty eight (79%) of 48 volcanic events identified in the sulfate deposition record of the Greenland Ice Sheet Project 2 ice-core correspond to 37 (54%) of 69 cold events in this 1219 year period. We show this association to be statistically significant at the 99.7% confidence level.”