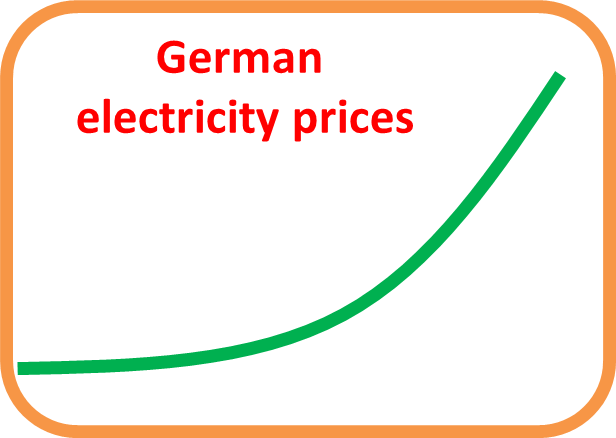 Awhile ago it looked as if prices had finally stabilized. But now Zschäpitz writes that German electricity prices, already among the highest in the world, have jumped once again.

To put the situation in perspective he writes: “Power consumers are now more burdened than automobile drivers” — who are brutally taxed to begin with. In Germany, even in these times of rock-bottom petroleum prices, motorists still cough up some 5 euros ($5.60) every single US gallon for gasoline they buy. Recently, proposals have been made to tax large cars even more, and to massively subsidize electric cars (which would be forced to charge up on the exorbitantly expensive electricity).

According to a recent analysis, writes Zschäpitz, “Consumers are now paying more for their power than ever before” — some 30.27 euro cents per kilowatt hour. Families today are paying 21% more for electricity than they did 5 years ago.

So what is driving the rapid upward price spiral?

Zschäpitz reports that it’s due mostly to the “Energiewende” – Germany’s push away from nuclear and fossil generated power to renewables such as wind, solar and biogas. Also driving the price are the energy price breaks that are granted to big power consumers, and liability costs for offshore wind parks. Moreover Zschäpitz reports that consumers are also forced to pick up the tab for upgrading the power grid so that it is able to handle the wildly fluctuating power supply from wind and sun.

In the meantime, Germany’s CO2 emissions have been rising, and thus consumers are not really getting anything for the massive amounts of money.

To illustrate the distortion gripping the German power market, Zschäpitz tells readers that today only 27% of the power price is made up of “pure raw material costs”. The electricity production cost by itself has in fact “fallen by 25% over the past few years“. However this cost reduction has been offset and more by other feed-in and grid operating surcharges levied as a result of the Energiewende. This leads Die Welt’s Zschäpitz to conclude:

For relief, power consumers do have the option of switching to private power providers, and doing so is non-problematic, Zschäpitz writes. However one thing is sure: Electricity prices are expected to keep rising.

60 responses to “Up! Up! And Away! Leading Daily Die Welt Reports: “Electricity In Germany More Expensive Than Ever””