According to the most highly-cited estimate of recent (1992 – 2011) polar ice sheet melt rates, the land ice on Greenland and Antarctica has been contributing to sea level rise at a rate of 0.59 mm/year in the modern era, which means the equivalent of 5.9 centimeters (2.3 inches) per century of sea level rise might eventually accrue if the polar ice sheets continue melting at current rates for the next 10 decades.

Of course, a sea level rise rate contribution from Greenland and Antarctica that amounts to a little more than 2 inches per century is not particularly alarming.  And when observed sea level rise contribution rates from melting ice sheets don’t elicit the headlining attention they deserve, it’s time to promulgate climate modeling catastrophes that might occur at some point in the distant future.

The paper, which has undergone some wording revisions since the original version appeared in July, 2015, apparently “concludes” that the polar ice sheets will soon melt catastrophically, and that this ice sheet melt contribution will in turn result in sea level rise of “at least 10 feet in as little as 50 years“.

“The study—written by James Hansen, NASA’s former lead climate scientist, and 16 co-authors, many of whom are ered among the top in their fields—concludes that glaciers in Greenland and Antarctica will melt 10 times faster than previous consensus estimates, resulting in sea level rise of at least 10 feet in as little as 50 years.“

Again, the combined Greenland and Antarctica ice sheet melt contribution to sea level rise was 0.59 mm/year during 1992 – 2011 (Shepherd et al., 2012), or about 6 cm (2.3 inches) per century.  To achieve James Hansen’s claimed sea level rise prediction of 10 feet (3.05 meters) within 50 years due to rapidly melting Greenland and Antarctica ice sheets, the current melt rates would have to increase by a factor of 100.  Instead of the polar ice sheet contribution rate of 0.23 of an inch per decade for 1992-2011, the rate in the next 50 years will need to average 23 inches per decade — two orders of magnitude more than presently observed.

And for the record, the observed melt-rate contribution from the Greenland and Antarctic ice sheets of 0.59 mm/yr for 1992 – 2011 is very likely an overestimate.  For one, NASA has reported that there was an overall ice mass gain for Antarctica during this same period (1992-2008), and thus a reduction in sea level rise equivalent to -0.23 mm/yr (rather than a net positive contribution of +0.19 mm/yr as determined by Shepherd et al., 2011).  Secondly, in current datasets the baseline period for establishing the surface mass balance (SMB) of the Greenland ice sheet is the 1961-1990 tricade.  However, those 30 years were notoriously cold in Greenland, a full 1.5 degrees C colder than the 1920-1940s period, when Greenland was actually as warm or warmer than recent decades.  If the baseline data were not centered on the coldest decades of the century, but instead included the 1920s-1940s warm period, the record of net “loss” for the Greenland ice sheet since the 1990s would be significantly reduced, and there may have been an overall net mass gain relative to the 1920s-’40s for recent decades.  Succinctly, different baseline data would yield an even more negligible Greenland ice sheet contribution to sea level rise for 1992-2011 than reported by Shepherd et al., 2011 (0.4 mm/yr, or 1.6 inches per century).

World-renown scientist Dr. Nils-Axel Mörner, a sea level expert who has authored hundreds of peer-reviewed scientific publication during his career, has recently weighed in on the preposterousness of claiming sea levels will rise even 1 meter in the next 100 years — let alone over 3 meters in the next 50, as James Hansen claims.  Using past records of sea level rise rates from the earliest decades and centuries of the Holocene (~11,000 years ago), Mörner concludes that it is not possible for modern sea levels to rise at rates of 10 mm/year (1 meter/century) — or faster than they did during a time when much of the Northern Hemisphere was still buried kilometers-deep in ice and temperatures were rising far more rapidly than today.

Sea level is globally varying between ±0.0 and +1.0 mm/yr (0.5 ± 0.5 mm/yr). … At 11,000 BP we had enormous amounts of ice still left in the huge continental ice caps of the Last Ice Age. In Canada, the ice front was in St. Lawrence lowland, and in Scandinavia, the ice margin was at Stockholm. At the warming pulse ending the Pleistocene and starting the Holocene, ice melted at an exceptionally strong forcing. Today, there is neither ice nor climate forcing that in any way can be compared to what happened 11,000 – 10,000 BP. The conclusion is obvious; we can never in present time have any ice melting and sea level rise as strong- and certainly not stronger-than that occurring at the Pleistocene/Holocene transition. Therefore, a rate of sea level rise of +10.0 mm/yr or 1.0 m per century can be held as the absolutely ultimate value of any present day sea level rise. Any present rise in sea level must be far below this value to be realistic in view of past records and the physical factors controlling ice melting. Therefore, we can also dismiss any claim of sea level rise exceeding 1 m in the next century as sheer nonsense and unfounded demagoguery. 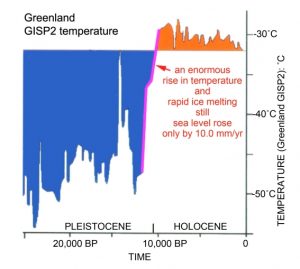 A year ago, Dr. Mörner detailed his comprehensive critique of the alterations to observed data (euphemistically referred to as “corrections”).  He determined that if the “corrections” (i.e., modeled adjustments that artificially raise sea levels) for the satellite data are removed, sea levels only rose at a rate of 0.45 mm/year (2 inches per century) between 1992-2015, which is about 1/7th of the rate of rise reported by altimetry datasets.

The mean of 182 sites (excluding a few outliers) scattered all over the globe is 1.6 mm/ yr. Because of long-term subsidence of many river mouth sites and site-specific compaction problems, this value may, in fact, represent a slightly too high value. The key sites here discussed provide values of about 0.0 mm/yr, and the Kattegatt and North Sea records give firm values around 1.0 ± 0.1 mm/yr. This data set is in deep conflict with the high rates proposed by the IPCC and satellite altimetry. The differences in rates can only be understood in terms of errors and mistakes. The true mean global eustatic component is likely to be found in the zone ranging from +2.0 mm/yr to ±0.0 mm/yr, and most probably in the lower half of this zone; i.e. within 1.0 – 0.0 mm/yr. The error was found to be in the satellite altimetry values for reasons of incorrect “corrections”

The only data set which hangs far above the others is the IPCC predictions. Those data, however, refer to assumptions and model out-puts, and are, by no means, anchored in observational facts. … [I]t is high time to abandon the idea of global isostatic adjustment, and to stop all kinds of GIA corrections of records of sea level changes (i.e. satellite altimetry, GRACE, tide gauges, etc.). 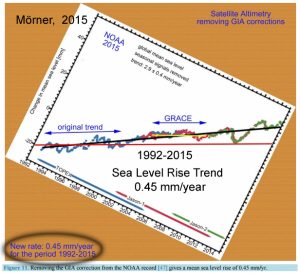 The reported rates exceeding 3 mm/year are based on models instead of direct observational measurements.  Echoing a 2015 paper from Beenstock et al., two more new papers (another by Mörner) indicate that observations (i.e., non-modeled, non-adjusted measurements from tide gauges from all over the world) of global sea level rise range somewhere between 0 and 1 mm/yr, or a few inches per century.

Using recently developed methods for nonstationary time series, we find that sea levels rose in 7 % of tide gauge locations and fell in 4 %. The global mean increase is 0.39–1.03 mm/year.

Observational facts recorded and controllable in the field tell a quite different story of actual sea-level rise than the ones based on model simulations, especially all those who try to endorse a preconceived scenario of disastrous flooding to come. “Poster sites” like Tuvalu, Vanuatu, and Kiribati in the Pacific have tide gauge stations indicating stable sea-level conditions over the last 20–30 years. The Maldives, Goa, Bangladesh, and several additional sites in the Indian Ocean provide firm field evidence of stable sea-level conditions over the last 40–50 years. Northeast Europe provides excellent opportunities to test regional eustasy, now firmly being set at +1.0 ± 0.1 mm/year. Other test areas like Venice, Guyana–Surinam, Qatar, and Perth provide a eustatic factor of ±0.0 mm/year. We now have a congruent picture of actual global sea-level changes, i.e., between ±0.0 to +1.0 mm/year. This implies little or no threat for future sea-level problems.

Tide gauges provide the most reliable measurements, and best data to assess the rate of change. We show as the naïve averaging of all the tide gauges included in the PSMSL surveys show “relative” rates of rise about +1.04 mm/year (570 tide gauges of any length). If we consider only 100 tide gauges with more than 80 years of recording the rise is only +0.25 mm/year. This naïve averaging has been stable and shows that the sea levels are slowly rising but not accelerating. …The satellite altimetry returns a noisy signal so that a +3.2 mm/year trend is only achieved by arbitrary “corrections”.

We conclude that if the sea levels are only oscillating about constant trends everywhere as suggested by the tide gauges, then the effects of climate change are negligible, and the local patterns may be used for local coastal planning without any need of purely speculative global trends based on emission scenarios.