Germany’s online Der Spiegel here reports that Germany once again will fail to reduce its CO2 emissions this year, 2017.

This is a profound embarrassment for Germany, a country that has been a staunch preacher of climate protection and one of the world’s most vocal critics of President Donald Trump’s decision to back out of the Paris Climate Accord.

According to the leftist Spiegel, greenhouse gas emissions in Germany rose by 5 million CO2 equivalent tonnes in the first half of 2017, hitting 428 million tonnes. That’s a jump of 1.2%. Experts say that the rise is likely due to increased petroleum consumption. According to Spiegel, diesel fuel sales are up 6.5 percent.

Part of the increased petroleum probably is due to low fuel prices, and the unusually colder than normal weather in January and April. Germany is failing horribly to reach its emissions targets, as the following chart shows: 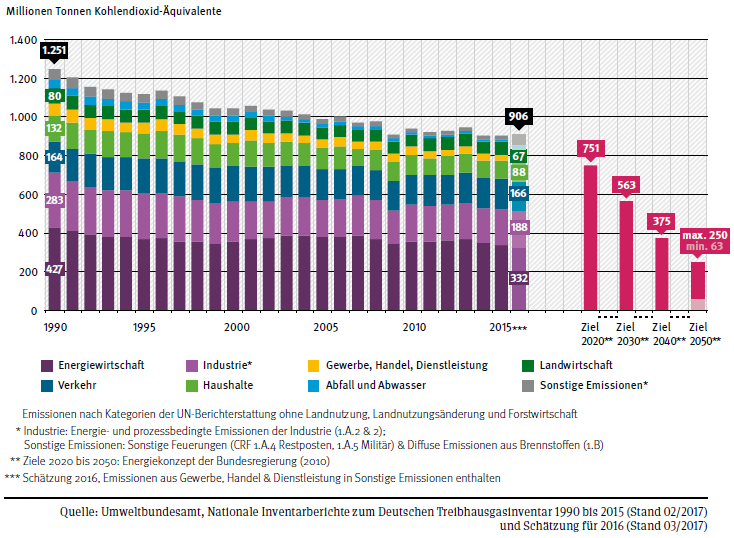 The bad news for the climate-protection-preaching Germany is that greenhouse gas emissions reductions are likely going to get far tougher, as once again the country’s leaders are managing to shoot themselves in the foot in the comedy that has become the Energiewende.

One of the country’s leading Green Party politicians, Winfried Kretschmann, has just warned that the current movement to ban the diesel engine will have serious climate target consequences, reports the online Die Welt. As the publicity against the diesel engine cranks up, people will opt for the gasoline-powered cars instead. The problem here is that diesel engines get far better fuel mileage than the Otto engines, and so German consumers will only end up spewing more CO2 in the atmosphere.

Also Germany’s flood of immigrants, who have other worries on their minds, will add to make the German targets an even bigger fairy tale.