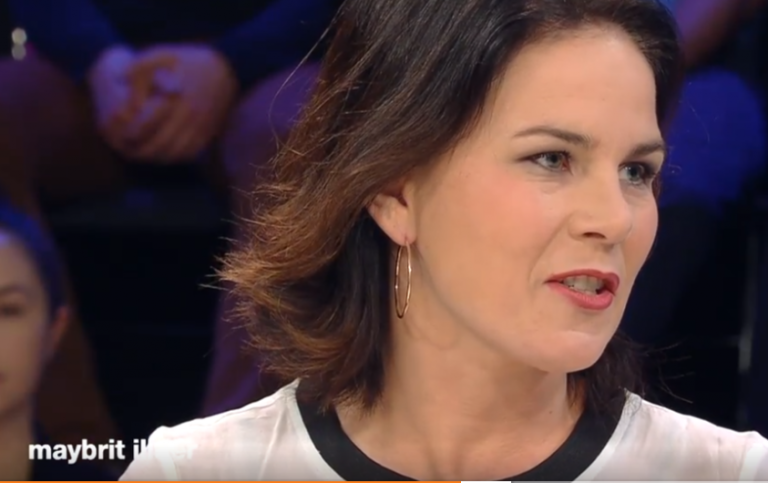 That figure of course sounded quite scary. But there’s only one problem: Baerbock was just a little off, by a factor of 1 billion! The average German citizen of course emits only 9 tonnes per year.

Just as scary is that no one from the “expert round” was well enough informed to call her out on her glaring exaggeration. Now if there had been someone included in the round who actually knew what he/she was talking about, like a real skeptic, she would have been promptly corrected. So now almost every person in Germany believes he/she emits 9 billion tonnes of CO2 annually, and that the citizens of Fergus Falls, Minnesota watch American Sniper everyday. German media has yet to reach a new low point.

In the talk show, Baerbock tries to act like an expert on energy and as if she holds engineering qualifications to tell us what Germany needs in terms of energy supply and what works. Her qualifications: She studied political science and public law at the University of Hamburg and got a Masters degree in public international law.

No balance, alarmism gets a free pass

Like most talk shows concerning energy and climate in Germany, the spectrum of views presented is always unbalanced and restricted. The talk show in question above included “energy experts”:

That’s right, a union coal miner was the best German public television could do to represent the skeptic side.

Media at its worst

Half of the round are made up of strident climate activists, one third (Altmaier and Lindner) are non-fanatic green energy supporters, and only one, the union man, is a supporter of coal. Real, articulate skeptics are never invited to these rounds. So it’s little surprise that Germans are so ill-informed and believe such things as 2 meters of sea level rise by 2100, each German person emits billions of tonnes into the atmosphere annually, and rural Americans watch American Sniper every day.

No wonder Germany’s Energiewende is such a mess, and risks getting a lot messier. One silly lot of boneheads has a free hand at running the country.