Share this…FacebookTwitterNASA has released its picture of the week, which is a graphic of global land temperature anomalies for the period July 4-11. Click here for details. What jump outs at me is the number of blue areas that have suddenly popped up on the continents. Where did they all come from? We keep hearing […] 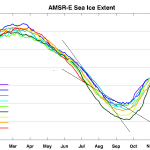 Share this…FacebookTwitterUPDATE 19 July: Steve Goddard has followed this post with a supplement, and provides more detailed information. http://wattsupwiththat.com/2010/07/18/sea-ice-news-14/ WUWT following up on my posts a day or two later seems to be becoming a trend over there. The NOAA is taking the liberty of declaring 2010 the hottest ever, even though it’s only July! […]

Share this…FacebookTwitterThe German online news magazine FOCUS reports here today that a new record low temperature has been set at a station in Antarctica. The Neumayer III station, operated by Germany’s Alfred Wegener Institute, has recorded the lowest temperature at their Antarctic location since the start of operations there 29 years ago. The mercury dropped to […]

Share this…FacebookTwitterReaders often provide good leads and write interesting comments. I’m sure some out there have interesting things to write. If you’re a reader at this blog and would like to post something here as a guest writer, then please send it in to me by e-mail. If it’s interesting enough I’ll post it here, with […]

Share this…FacebookTwitterH/T to reader DirkH The German edition of the Financial Times has a story today on wind energy’s latest debacle in Germany: treehugger-bureaucrats. In one corner we have environmentalists demanding the installation of wind energy to avert a climate catastrophe, and in another corner you have environmentalist bureaucrats stopping windparks in order to protect local wildlife. […]

Share this…FacebookTwitter35 scientists from 12 countries led by the Leibniz Institute for Ocean Sciences (IFM-GEOMAR) studied for 6 weeks the effects that increasing CO2 concentrations would have on life in the sea. Read here (German).Human emissions of CO2 lead to higher concentrations in sea water and thus lower its pH value. The study is led by […]

Share this…FacebookTwitter There’s been talk recently about a new scare that environmentalists have come up with to replace the all-but-defunct AGW scare.  The evil villains are, again, the very thing that have made our lives immensely better: INDUSTRY. The new scare is: industry is destroying biodiversity.    Today at least two of Germany’s leading online news outlets are […]

Share this…FacebookTwitterSolar cycle 24 took its time getting started, and when it did, it sputtered and faded. But that’s about to change, reports the German edition of the online Russian news service Ria Novosti here.Russian scientists say that the sun will soon come alive after having observed a total eclipse at Easter Island in the Pacific yesterday. […]

Exasperated German Environment Minister To Environmentalists: "Show Us Your Proposal!"

Joe Bastardi: Coming Cooling Will Be Coldest Since Early 90s

Share this…FacebookTwitterJoe Bastardi’s latest video here says the coming La Nina-related cooling will be the coldest since the Pinatubo cooling in the early 1990s.Video: Joe Bastardi predicts coldest cooling since Pinatubo. He says: It doesn’t take a brain surgeon to figure that out. So what could possibly cause that kind of cooling? Not a volcano, […]

Share this…FacebookTwitterResearchers at Germany’s Karlsruhe Institute for Technology have laid the cornerstone for a pilot plant that will produce a new kind of cement called Celitement®. Read here. This new cement developed by KIT researchers can be produced at far lower temperatures and with less lime than conventional cement. It has the potential to save 50% of […]

Share this…FacebookTwitterMy local newspaper Osnabruecker Zeitung (OZ) has an online story here about the dramatic ARCTIC sea ice melting in June. This is typical of German media climate reporting. The introduction reads: Arctic sea ice last month melted faster than in any June since measurements have been taken, since 1979. 88,000 square kilometers of white […]