Joe Bastardi: “Future Shock…Brutal Winters Ahead from 2013 On…Now Into A Major La Nina”

Share this… Facebook TwitterThat’s what Joe says in his latest video. The PDO is now going into its cold phase and the current La Nina is going to be a bear – and quite possibly a polar bear at that. The Pacific, the primary global climate driver, has been in its warm cycle since the […] 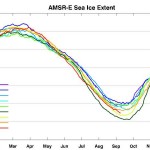 Share this… Facebook TwitterThe Arctic had a steep last spurt of melt over the last week, sending the ice area below 5 million sq. km. That puts 2010 as the third lowest ice extent, or the 2nd highest in the last four years, spin it the way you want. But the melt is now pretty […]