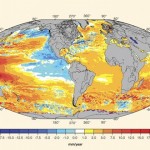 Share this…FacebookTwitterHere’s something the alarmist warmists can put in their pipes and smoke. A new paper titled El Niño–Southern Oscillation variability from the Late Cretaceous Marca Shale of California authored by Andrew Davies, Alan E.S. Kemp, Graham P. Weedon, and John A. Barron shows that a permanent El Nino did not exist during that particular […]