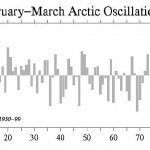 Share this… Facebook TwitterBy MATTI VOORO A recent news clipping on the research of an international climate scientist claimed rising temperatures during the other three seasons are actually cooling off winters in North America –all because of snowfalls in Siberia and an atmosphere pressure pattern in high latitudes called the Arctic Oscillation (AO). The argument […]

Share this… Facebook TwitterAmid all the solar bankruptcies and exorbitant subsidies being paid out and causing electricity rates to skyrocket, see previous post, here’s hippie David Suzuki in the following video (3 min. mark) insisting “It’s free, man, it’s free!” With idiots like that advising governments, we’re not surprised everything is going bankrupt. It may […]

Share this… Facebook TwitterImagine if the government forced supermarkets to buy bread from plain white bread bakeries, ordered them to pay these bakeries a fixed price that’s 5 times higher than normal for 20 years, and forced them to buy up all the white bread these bakeries could produce, whether needed or not. And imagine if the government […]

Share this… Facebook TwitterThe English Der Spiegel presents a blistering report on the solar energy debacle in Germany this week in a piece titled: Solar Subsidy Sinkhole, Re-Evaluating Germany’s Blind Faith in the Sun. The costs of subsidizing solar electricity have exceeded the 100-billion-euro mark in Germany, but poor results are jeopardizing the country’s transition […]

Share this… Facebook TwitterHave you ever been to a dinner party with lots of people when suddenly a mouse runs across the room and someone yells “mouse!” Most people simply ignore the intrusion, while others may ask “where?” But you can always count on someone flying into a fit of hysteria, jumping up on a […] 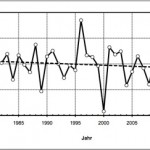 Share this… Facebook TwitterIt’s official: the Alfred Wegener Institute Antarctic Neumayer-Station III is a meteorological observation station that’s been measuring air temperature and other magnitudes in Antarctica for 30 years, which is the period of time used to define climate for a region. The results are clear and indisputable. The AWI writes in its press release: At […]

Share this… Facebook TwitterSome of us may have had suspicions in the past. Now it’s confirmed – some parts of the green/climate movement are so radical that they are now attracting neo-Nazis and extremists. The online German leftist daily TAZ has come out with an article that describes a disturbing phenomena, namely: the green movement […]

Share this… Facebook TwitterDer Spiegel reports today that scientists have identified soot (black carbon) as one of the major global warmers out there. According to Science Journal here, a team of 24 experts led by NASA scientist Drew Shindell looked at 400 emission control measures and identified 14 measures targeting methane and black carbon (BC) emissions that […]

Share this… Facebook TwitterSorry, but I always get a little nervous when top German and European officials put themselves first in line for a “new world order” that will tell the rest of the world how to behave. Other countries outside of Germany or Europe can and should decide for themselves how to live and run things. […]

Gone With The Wind – The Green Jobs Dream Is Disappearing

Share this… Facebook TwitterThe woes in the renewable energy sector continue unabated. We’ve heard a number of headlines of jobs being lost in the solar industry – now jobs are being lost in wind as well. According to news reports, the world’s largest wind tuirbine manufacturer, Vestas,  will lay off another 2300 workers worldwide, along […]

AMO – A Significant Weather Maker Along The Canadian East Coast

Share this… Facebook TwitterBy Matti Vooro After years of being ignored by AGW climate scientists and modelers, the Atlantic Multidecadal Oscillation (AMO) has more recently been recognized as a factor in climate forcing. The Met Office at the December 5-9, 2011 presentation at the Fall AGU Meeting reported that they now use AMO unfiltered in their interannual and decadal climate forecasts. […]

Share this… Facebook TwitterGreenland Is Turning White By Ed Caryl “No place on Earth is warming as fast as Greenland,” we keep hearing. Or: “Greenland is approaching a tipping point!” Figure 1: Dundas Mountain and Northstar Bay at Thule AFB, Northern Greenland. Photo by Ed Caryl The Arctic is known as a desert, with little […]