This is a short extension to my last article on Why The Earth Is Cooling. When I first began exploring Modtran, the numbers it produced for downward radiation at the surface seemed to make no sense. It nearly always produced the same number, and I thought that part of the program was broken. On reflection, it became clear that the numbers were correct and that I had fallen into the warmist trap of believing that CO2 really does something to the Greenhouse effect. When the numbers in the very low humidities were charted, all became clear.

Here is what Modtran says about downward or “back” radiation at the Earth’s surface for values of humidity from 0 to 90% and CO2 from 0 to 1000 ppm. 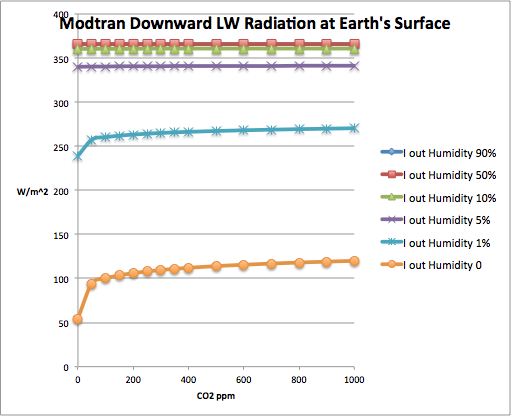 You should notice that the legend cites six traces, but you see only four. That is because the 10, 50, and 90% humidity traces are superimposed. There is very little change in the downward radiation for any humidity from 10% and above and for any CO2 concentration from zero to 1000 ppm, or indeed for any concentration of CO2 up to 10,000 ppm.

Here are the Excel numbers copied from Modtran used to draw the above table:

As you can see, only in the driest desert on Earth will increasing CO2 increase the “back” radiation. Water vapor is by far the strongest greenhouse gas, but it is nearly saturated at 10% humidity. At 10% humidity and above, no amount of CO2 does anything. Most of the humidity on Earth is in that area on the right where doubling CO2 will do nothing to increase the long-wave radiation from the sky. Yet another warmist fail.

Unless the entire planet very soon goes to zero-percent relative humidity, we can go ahead and shut down the global warming hoax industry. If it’s happening, it is hardly because of CO2.

33 responses to “Epic Warmist Fail! – Modtran: Doubling CO2 Will Do Nothing To Increase Long-Wave Radiation From Sky”