Share this…FacebookTwitterWith every passing year we get without global warming, CO2 loses more and more of its credibility as the cause for climate change. So what to do? Move on to another issue that will do just as well. Blame it on soot from automobiles and industry, and push for lots of regulation. Black soot is […]

Share this…FacebookTwitterWhat temperature rise does a doubling of atmospheric CO2 lead to? Overall, the IPCC says anywhere from about 2 – 6°C, i.e. they don’t know. Recently the Germany-based European Institute for Climate and Energy (EIKE) posted an essay by Dr. Wolfgang Burkel, who concludes that doubling atmospheric CO2 will lead only to a 0.58°C of warming […]

Share this…FacebookTwitterToday I thought I’d bring up one or two of the highlights of the Bern Debate between Fritz Vahrenholt and IPCC author Thomas Stocker. One highlight is Stocker getting all huffy and puffy about Vahrenholt calling Mann’s hockey stick a “Fälschung” (fake). Bern Debate now on Youtube! At the 4:50 mark Vahrenholt presents the […]

Share this…FacebookTwitterUPDATE: See debate video in German: http://www.swissecs.ch/de/live-blog/3.   All Stocker had for arguments was: 1) insisting Mann’s phony hockey stick was still valid 2) claiming there’s scientific consensus, and 3) we can trust the models! All three of course have long been proven to be false. Their science is that bad, folks. I never […]

Share this…FacebookTwitterThe mainstream media, and I’m sure many within Fritz Vahrenholt’s own party, have been expending huge effort to keep his message and his sceptic book Die kalte Sonne bottled up. That effort has failed. Vahrenholt is getting his message out. Vahrenholt’s message along with the ever growing hopelessness for success we were told to […]

Share this…FacebookTwitterUPDATE: See debate video in German: http://www.swissecs.ch/de/live-blog/3. All Stocker had for arguments was: 1) insisting Mann’s phony hockey stick was still valid 2) claiming there’s scientific consensus, and 3) we can trust the models! Their science is that bad, folks. I never would have believed it. The IPCC is really looking like a comedy act. […]

Share this…FacebookTwitterRoss McKitrick prominent exposer of the IPCC hockey stick scandal comes to Berlin By: W. Müller, M. Limburg (Translated/edited by NoTricksZone) Prof. Ross McKitrick, economist and statistician of the University of Guelph (Toronto, Canada) will make a speech in the Haus der Zukunft (House of the Future) at Albrechtstraße 11 in Berlin on 17 […]

Share this…FacebookTwitterHey journalists! If you think it’s hot in the Arctic, check out Antarctica! It’s over 100°F (with a minus in front). With a nice warm breeze, too. Boy, I’m so scared about melting down there! Antarctica just refuses to cooperate with the global warming meltdown narrative. Down at the South Pole it’s early spring, […] 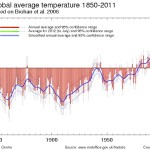 Share this…FacebookTwitterVeteran meteorologist Klaus-Eckart Puls of the European Institute for Climate and Energy (EIKE) analyzes, puts the 2012 Arctic sea ice melt in perspective. Arctic Ice Melt – Is The End Of The World Coming? by Klaus-Eckart Puls (Translated and edited by P Gosselin) Over the last years things have been very quiet among the climate alarmists […]

Share this…FacebookTwitterProfessor Fritz Vahrenholt’s and Dr. Sebastian Lüning’s skeptic book Die kalte Sonne has succeeded in exposing something unsettling, something that the established German climate scientists have been harboring for quite some time now: an acute phobia of climate science debate. This phenomenon is now being exposed by a recent flurry of newspaper articles. For example, yesterday I […]