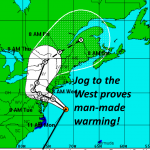 Share this… Facebook TwitterIt used to be that weather extremes were “proof of man-made warming”. But because that argument didn’t seem to sway anyone, the warmists have taken it a level higher: now even the storm’s path is proof. This is how desperate they’ve become. Thirty years ago, such people would have been committed to […]