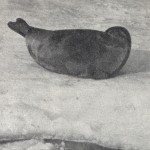 Share this… Facebook TwitterSpiegel June 2006: “For the Baltic ringed seal climate change could mean its demise warned a team of scientists at the Baltic Sea Experiment (Baltex) conference in Goteborg. This is because the warming leads to the ice on the Baltic Sea to melt earlier and earlier every year.” Seven years later, in 2013, […]