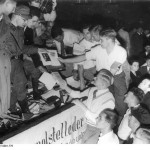 Share this… Facebook TwitterToday is the 80-year anniversary of mass book burning by Nazi Germany in 1933, one of the darkest chapters of human civilization. Literary and philosophical works that did not conform to the ideological standards of the Nationalist Socialist Party were collected from prestigious university libraries and burned in public. They included some […]

Share this… Facebook TwitterNo. 1, multi-million circulation national daily Bild here has an unflattering piece about Al Gore and his newly found mega-riches titled: “Al Gore earned 75 million euros – in one month!” So profitable can the global warming scam be! Never mind that there hasn’t been a bit of warming in 15 years. […]

Posted in Lifestyles of the Rich and Alarmist | 4 Responses