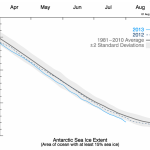 Share this…FacebookTwitterRemember a few years ago when Dr. Mark Serreze, Director of the National Snow and Ice Data Center, nsidc.org, talked about the Arctic being in a death spiral because of sea ice was disappearing due to man-made global warming? Well, I’ve found another one of his death spirals…this one in Antarctica, which has been breaking […]

Share this…FacebookTwitterIn the second half of June, global warming catastrophe worshippers were already salivating worse than Pavlov’s dogs when Arctic sea ice melt accelerated at a dizzying rate (see 2nd chart down below). Some datasets even show a refreeze occurring in late July! Source: http://arctic-roos.org/cearea.png But in mid July, something happened unexpectedly: the North Pole […]