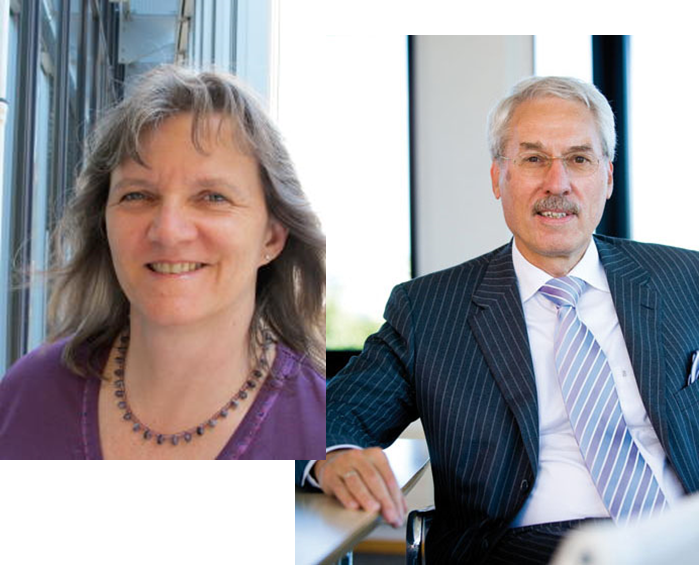 Professor Fritz Vahrenholt, one of the fathers of the modern environmental movement, and today persona non grata for having published a skeptical climate science book last year, met IPCC climate scientist Daniela Jacob in a head-to-head debate before an audience of 100 at the Scandic Hotel in Hamburg yesterday evening. The debate was organized by Angela Merkel’s CDU Christian Democratic Party.

Vahrenholt trounced the former NCAR scientist, who was broken down into making a number of admissions.

Spiegel writes in the photo caption:

Unusual debate at the CDU in Hamburg: A renowned climatologist debates scientist critic and RWE supervisory board member Fritz Vahrenholt. The dispute reveals a new stage in the handling of climate prognoses.”

The days of uncritical acceptance of climate prognoses are over. The trust is gone. Open criticism of climate science is gaining traction in Germany as climate prognoses from renowned institutes are being viewed by the public and media with increasing skepticism. Spiegel writes:

After Vahrenholt and Jacob each made a presentation and duked it out in a heated dispute, the duel appeared to decide: “When the climate models do not agree with the reality”, Vahrenholt thundered, “then reality is not what’s false!”

Hostile audiences are becoming a thing of the past for climate skeptics – even among the generally climate alarmist CDU conservative party audiences. The overall reaction by the Hamburg audience signals a growing, pent-up resentment among Germans as the inkling that the climate catastrophe is more charade than fact begins to sink in.

In its article, Spiegel calls the growing disagreement between model results and measured observations “the wound of climate science“.  Spiegel writes on Vahrenholt’s claim of faulty models:

With that statement Vahrenholt bored into the wound of climate science: For 15 years the global mean temperature has remained stagnant, the computer models had not foreseen the warming pause. The models could not reproduce the surprising temperature trend, reported climatologists surrounding Hans von Storch of the Helmholtz-Zentrum GKSS in a new study. The probability that the simulations in this respect are faulty is higher than 98 percent. The climate catastrophe is refuted, believes Vahrenholt, who made his audacious claims into a bestseller.”

That German establishment-shaking bestseller is now coming in English in September: North America and UK. And there are discussions to have the book out in Polish.

Vahrenholt scoffed at the excuse that the oceans had swallowed up the heat, saying it was not credible. Jacob even desperately had to cite the Bible to explain the missing heat: “We know this already from the Bible: Seven goods years follow seven bad years.”

Prognoses with “concrete numbers was an error”

Jacob reluctantly had to admit the shortcomings with the models, blaming poor communication for the model failures: “We do however have to improve the communication with the public,” Jacob admitted. “One error was giving out concrete figures for the prognoses.” She then conceded that we ought not be surprised that the models projections were wrong and that there’s lots of uncertainty, adding: “In the economy and in a marriage they aren’t any better.”

Untypical for an IPCC scientist, Jacob also admitted that the models exaggerated. “I don’t think highly of that. we all have learned from it.”

Why did no scientist intervene?

With that admission, Bojanowski writes that Vahrenholt didn’t pass up the opportunity to capitalize, loudly demanding:

Why is it then, when panic was rampant, no moderate climate scientist intervened? … You too must sometimes publicly distance yourselves from the agitators at the Potsdam-Institute, Frau Jacob!”

The catastrophic heightening of some scientists now threatens to destroy Germany as a place to do business.  … 1000 billion euros for the Energiewende, who is going to pay for it?”

Good question. And what does a scientist feeding on the public trough like Jacob care? Her answer, Spiegel writes:

I makes statements in my field of study as a scientist, and not politically.”