Share this…FacebookTwitterShort Summer Thaw Season Back in May we had extensive discussion about the unusually cold spring conditions, which broke some longstanding records in Fairbanks – including the latest date with daily mean temperature below freezing (May 18). With the early arrival of freezing conditions this month, it should be no surprise that the length […] 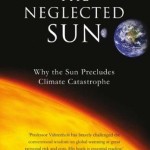 Share this…FacebookTwitterUPDATE … Now available in USA: http://www.amazon.com/The-Neglected-Sun-Precludes-Catastrophe/dp/1909022241 It’s the book they don’t want you to read. The Neglected Sun is back on sale (at least in the UK) after the first printing was sold out. Some readers wrote me saying that they were no longer able to order the book. I don’t know how […]

Share this…FacebookTwitterNow we know what this is really all about: scaring the public into “rigorous climate policies”. In my last post I mentioned that the English language Spiegel here has a comprehensive piece on the IPCC’s ideological struggle on whether or not to include the 15-year warming hiatus in the AR5 Summary Report. Spiegel quotes […]

Share this…FacebookTwitterThe media today are raving over Angela Merkel’s “huge victory“, with some even calling it “historic” or even a “blowout”, as Drudge does. But this isn’t so by any means. Merkel’s government LOST and will soon no longer be in power. The perception of media outlets from Great Britain and in the USA surely has been […]

Share this…FacebookTwitterThe preliminary results of Germany’s national election are rolling in. What’s sure is that Angela Merkel’s conservative CDU/CSU party is the winner, with projections showing them currently capturing a massive 42.5% of the votes. Preliminary, early results show the Greens (Grüne) collapsing to 8% (2009: 11%) thus eliminating the possibility of a socialist/green coalition government made […]

Warming Gets Delayed Again…IPCC Scientist Mojib Latif: Pause “May Stubbornly Remain Until 2020 or 2025”!

Share this…FacebookTwitterGerman online Spektrum.de science magazine conducted an in-depth interview with two leading international climate scientists, Professor Mojib Latif and Professor Hans von Storch. For the record, both now concede that global temperatures have indeed defied the vast array of (expensive) model projections and have not gone up in 15 years. Now more than ever before […]

Share this…FacebookTwitterThere’s a lot going on today as the IPCC continues to clash violently with climate reality. We’ve always suspected that governments had contracted out the results to begin with. In the beginning, the scientists played along. After all the observations nicely followed the model projections for almost 2 decades. But the wanted results are no […]

Share this…FacebookTwitterThe fallout surrounding the profound failures of the climate models used by the IPCC continues. If the German media is anything to go by, then IPCC science is virtually disintegrating before our very eyes. Europe has always been a bulwark against climate skepticism. No more. The online German ‘Die Welt’ daily reports today that […]

Share this…FacebookTwitterRecall how we were told over and over again that nowhere on the planet was warming faster than the Arctic. Greenland melting was supposed to be melting rapidly and a tipping point was fast approaching. But things seem to be swinging the other way now. This year has not been a good year for […]

Share this…FacebookTwitterThe purpose of the House Climate Change Hearing is to shed light on the question of: How much is man contributing to climate change, and how responsible is Obama’s energy policy? So far the skeptics feel that the hearing has been successful in communicating their case to the public. The office of Rep. David […]