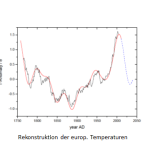 Share this… Facebook TwitterClimate reveals periodic nature, thus no influence by CO2 Prof. H. Luedecke and C.O. Weiss (Original German version here.) We reported recently about our spectral analysis work of European temperatures [1] which shows that during the last centuries all climate changes were caused by periodic (i.e. natural) processes. Non-periodic processes like a warming through […]

Share this… Facebook TwitterThese are just some of the key headline words Europeans can expect to see and hear by Thursday and Friday. The media, climate activists, and reinsurers are already salivating massively. For sure the scientists at the PIK and Mojib Latif are already practicing their lines. They’re eagerly standing by their phones, ready for […]