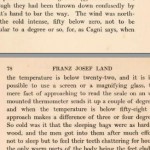 Share this… Facebook Twitter+++++ Polar Islands Of Heat By Ed Caryl I would like to thank “John”, a commenter on my article on why the Antarctic sea ice is expanding, for inspiring this article. Other writers and researchers have noticed that temperature measurements in the polar regions are influenced by nearby heat sources, even the […]

Share this… Facebook TwitterThe seemingly climate doomsday-obsessed Potsdam Institute for Climate Impact Research (PIK) tweeted a link to the Berlin Staatsoper (Berlin State Opera), which is announcing a benefit concert dubbed “Science Meets Music“, slated for 30 August 2014. The proceeds raised will go to the NaturTon Foundation. I just had to laugh at the new […]