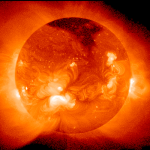 Share this…FacebookTwitterBy Ric Werme Many have been watching the gradual development of Andreas Rossi’s “E-Cat,” a device Rossi claimed to produce heat from fusing nickel and hydrogen at commonly used temperatures, as opposed to those in core of a star. Photo: NASA The next big event, the release of a paper reporting on a month-long […]