Nothing could be further from the truth.

In reality her op-ed piece ranks right up there close to George W. Bush’s famous “Mission Accomplished” declaration – shortly after Saddam Hussein’s regime was toppled in 2003. Shutting down nuclear power plants and massively subsidizing the installation of solar and wind systems to the tune of hundreds of billions of euros was also easy and “successful”. But now comes the terrible costs and abject failure no one wishes to talk about.

Even the German government’s own commissioned independent committee of expert advisors recommends that the EEG renewable energy feed-in act be scrapped altogether.

In the op-ed piece Hendricks for example claims that Germany is on track to reduce its CO2 emissions by 40% compared to 1990 levels. The truth here is that Germany’s CO2 emissions have been rising over the past couple of years and the token (illusory) measures Germany decreed some weeks ago are widely viewed as mere actionism. 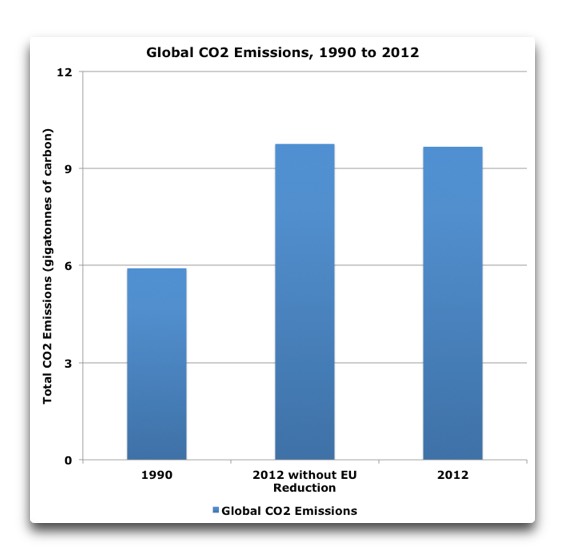 Hendricks also claims that between 1990 and 2012 greenhouse gas emissions in the EU fell by 18% while the overall economy grew by around 45%. That kind of growth over a twenty two year period is anemic at best. Moreover, the 18% reduction claimed by Ms Hendricks is likely an exaggeration. According to CDIAC data, the EU has reduced CO2 emissions only by 10.7%, see chart right (hat-tip: W. Eschenbach).

Much of the achieved reductions resulted from the shut-down of filthy, dilapidated, communist-run Eastern European industries after the 1989 fall of the Berlin Wall.

Another misleading whopper is her claim that the “economic impact has been broadly extremely positive” and that “renewable energy sources now account for nearly 30% of our electricity demands“. Here Hendricks forgets to mention that almost every single solar system manufacturer in Germany has gone bankrupt – resulting in the loss of tens of thousands of jobs, read here and here.

Hendricks also fails to mention that much of the generated 30% renewable electricity is done so when the energy is not even needed. Germany at times has to pay countries to accept the unwanted surpluses in production, leading to “negative prices” on electricity exchange markets. Also Germany’s leading power companies such as RWE have been shedding thousands of high-paying power sector jobs and spilling red ink.

Hendricks says that “1.5 million people working in this sector“. She does not say where. Europe? Worldwide? She also does not mention that each “renewable energy job” in the wind and solar branch cost far more in subsidies than what the jobs themselves earn.

Finally, Hendricks makes it sound as if the green industry is a huge benefit to poor people, claiming “money that would otherwise have been needed to import expensive fossil resources now instead goes to individuals, cooperatives, farmers, and small and medium-sized enterprises, that can all themselves become energy suppliers.” Here the opposite is true. Not only are German power consumers paying among the highest utility prices worldwide but Germany’s renewable energy feed-in act is called by many experts the biggest wealth redistribution scheme from the poor to the rich. What’s worse is that hundreds of thousands of households have had their electricity shut off because it is no longer affordable.

The op-ed piece by Barbara Hendricks resembles nothing a normal person would ever expect from a minister of a government based on democratic values.