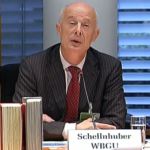 Share this…FacebookTwitterThey’re back. Hans-Joachim Schellnhuber and his WBGU have just released their latest Special Report: Climate Protection as a World Citizen Movement. The 126-page report is the 9th of its kind since the first one was published in 1995. Professor Schellnhuber telling German Parliamentarians to act as he and his WBGU recommend, or else sea levels […]

Share this…FacebookTwitterMy last post featured a commentary by renewable energy expert Prof. Fritz Vahrenholt, who forcefully conveyed the folly of Germany’s mad rush into renewable energy, and the country’s hysterical obsession with its suicidal fast-track shutdown of its stable base-electric-power generation. What follows are German electrical power supply charts that clearly illustrate in no uncertain […]

Share this…FacebookTwitterWhat follows is Professor Fritz Vahrenholt’s reaction to German power giant E.ON’s decision to split off its fossil fuel and nuclear power generation operations, and Russia’s announcement it has cancelled the construction of South Stream gas supply pipeline to Europe. ========================= This week two events have occurred and will have serious impacts on the European and […]

Share this…FacebookTwitterThe main media often avoid reporting catastrophes involving bitter cold winter conditions, as it may cause the public to doubt global warming. So it’s little wonder that they have opted not to report on an ongoing massive blizzard pounding the Russian Orient, northern parts of China and extending to northern Japan. However, the smaller […]

Share this…FacebookTwitterChief Executive Johannes Teyssen of German power giant Eon announced yesterday the spin off of its fossil fuel and nuclear generation operations, saying it will focus instead on renewables like wind power, energy efficiency technology, and smart grids. The announcement yesterday sent shock waves through Germany’s power generation market and the political landscape. The moves […]

Share this…FacebookTwitterNot only do the hysterical global warming bedwetters want us to do it with the lights off in unheated room with all our clothes on, now they are poised to request senior citizens to leave their cars in the garage and get around in the rain and snow by foot with their Rollators. Hat-tip: […] 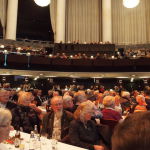 Share this…FacebookTwitterGerman skeptic site Klimanotizen brings us what I view as very good news on the trend of climate science skepticism in Germany. Readers need to keep in mind the very harsh environment skeptics face in Germany, where they are targeted and marginalized by powerful forces such as major arms of the government, leading politicians, massively […]