Share this… Facebook TwitterOn Mike Brakey’s recent post on the NOAA’s 151 degrees of fudging of the temperature datasets for the state of Maine, one reader was “so incensed” that he e-mailed the NOAA and his congressman. Well, he got a reply from Derek Arndt at NOAA, which he sent to Mike Brakey, who in […] 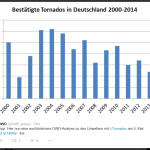 Share this… Facebook TwitterThe Deutsche Wetterdienst (German Weather Service), DWD, released a bulletin providing background information on a cold front that passed through the country last Tuesday and unleashed some severe storm activity. In the East German town of Bützow a tornado even touched down and caused severe damage and dozens of injuries. To give an idea […]