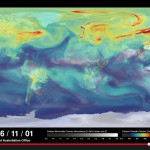 Share this… Facebook TwitterBy Ed Caryl On 1 July 2014, NASA launched OCO-2, the second attempt at orbiting a global carbon dioxide observatory. In December, the first global map was released. Compare this map with a frame from a previously released video showing a model of what the CO2 distribution was thought to be for […]

Share this… Facebook TwitterMy father used to say that medical doctors were really gangsters in white coats. I used to think he was just being cynical, and so I pretty much dismissed it. Well it turns out his attitude allowed him to live beyond 90, and today I realize he was right all along. What […]