Michael Mann Blemishes Himself In Austria …German Scientists: “Can No Longer Be Taken Seriously”

Share this… Facebook TwitterGerman climate science critics Dr. Sebastian Lüning and Prof. Fritz Vahrenholt, authors of the book: The Neglected Sun, have a comment at their ‘Die kalte Sonne’ site where they criticize Dr. Michael Mann for making reality-detached claims. Hockey stick inventor Michael Mann makes himself look foolish in an ORF-Interview: “One thing they […] 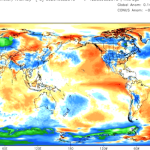 Joe Bastardi: “Heat Will Not Get Erased By Three Solar Cycles …July 2015 Not The Warmest

Share this… Facebook TwitterJoe Bastardi at his Weatherbell Analytics presents an excellent Saturday Summary that looks back at earlier El Nino events. Today’s El Nino is being hyped and many are preparing to say that July 2015 will be among the warmest, if not the warmest, on record. Chart: NCEP However the veteran meteorologist tells […]