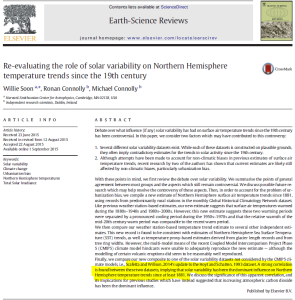 Recently a blogger spouted off about the science of the sun’s role on climate, and so the latest paper on the topic published in Earth-Science Reviews last month is timely.

Once again we have a paper, authored by Soon et al, that indicates the sun’s powerful impact on our climate and that CO2 is a minor player. Moreover the paper reaffirms that the 1950s – 1970s cooling was indeed real  and pronounced.

Here’s the abstract with my emphasis added:

Debate over what influence (if any) solar variability has had on surface air temperature trends since the 19th century has been controversial. In this paper, we consider two factors which may have contributed to this controversy:
1.
Several different solar variability datasets exist. While each of these datasets is constructed on plausible grounds, they often imply contradictory estimates for the trends in solar activity since the 19th century.
2.
Although attempts have been made to account for non-climatic biases in previous estimates of surface air temperature trends, recent research by two of the authors has shown that current estimates are likely still affected by non-climatic biases, particularly urbanization bias.

With these points in mind, we first review the debate over solar variability. We summarise the points of general agreement between most groups and the aspects which still remain controversial. We discuss possible future research which may help resolve the controversy of these aspects. Then, in order to account for the problem of urbanization bias, we compile a new estimate of Northern Hemisphere surface air temperature trends since 1881, using records from predominantly rural stations in the monthly Global Historical Climatology Network dataset. Like previous weather station-based estimates, our new estimate suggests that surface air temperatures warmed during the 1880s–1940s and 1980s–2000s. However, this new estimate suggests these two warming periods were separated by a pronounced cooling period during the 1950s–1970s and that the relative warmth of the mid-20th century warm period was comparable to the recent warm period.

We then compare our weather station-based temperature trend estimate to several other independent estimates. This new record is found to be consistent with estimates of Northern Hemisphere Sea Surface Temperature (SST) trends, as well as temperature proxy-based estimates derived from glacier length records and from tree ring widths. However, the multi-model means of the recent Coupled Model Intercomparison Project Phase 5 (CMIP5) climate model hindcasts were unable to adequately reproduce the new estimate — although the modelling of certain volcanic eruptions did seem to be reasonably well reproduced.

Finally, we compare our new composite to one of the solar variability datasets not considered by the CMIP5 climate models, i.e., Scafetta and Willson, 2014’s update to the Hoyt and Schatten, 1993 dataset. A strong correlation is found between these two datasets, implying that solar variability has been the dominant influence on Northern Hemisphere temperature trends since at least 1881. We discuss the significance of this apparent correlation, and its implications for previous studies which have instead suggested that increasing atmospheric carbon dioxide has been the dominant influence.”

In the conclusion the authors write (my emphasis):

If the Hoyt & Schatten reconstruction and our new Northern Hemisphere temperature trend estimates are accurate, then it seems that most of the temperature trends since at least 1881 can be explained in terms of solar variability, with atmospheric greenhouse gas concentrations providing at most a minor contribution. This contradicts the claim by the latest Intergovernmental Panel on Climate Change (IPCC) reports that most of the temperature trends since the 1950s are due to changes in atmospheric greenhouse gas concentrations (Bindoff et al., 2013).”

So add another paper to the growing mountain that indicates the sun is the real driver. The ongoing denial of this is getting ridiculous.