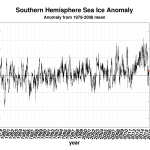 Share this…FacebookTwitterExamining the hard data on sea ice extent at the Earth’s poles, it would be very tough to argue that the globe is warming. Melting has stopped in the Arctic In the Arctic sea ice extent has indeed on average dropped a million square kilometers. But a look at the plotted sea ice anomaly data […]