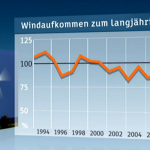 Share this…FacebookTwitterGerman ZDF public television here brings a report on the performance of wind turbines in Germany titled: “Wind energy – a loss business?“. In summary: Investors are losing money and many are finding themselves the victim of overblown promises. ZDF public television wind occurrence chart above based on data provided by the German Association […]