According to a just-published (2016)  Nature scientific paper, large portions of the Greenland Ice Sheet (GIS) are significantly melting from below due to massive geothermal heat flux forcing. A natural explanation for ice sheet loss is not consistent with the paradigm that says the melting of the GIS is largely due to changes in atmospheric CO2 concentrations. 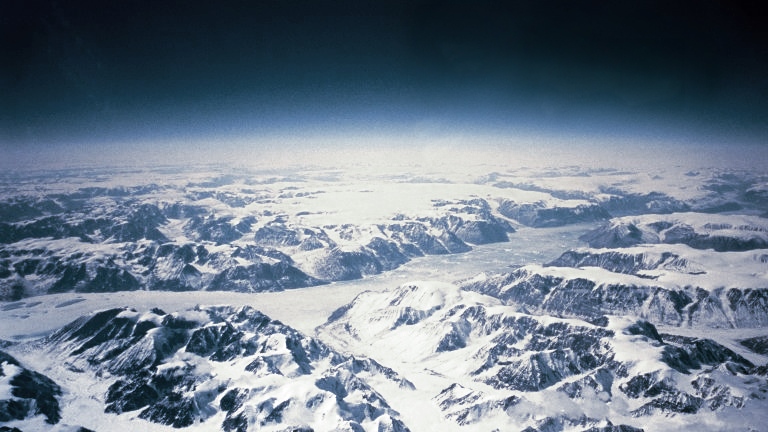 Ice-penetrating radar and ice core drilling have shown that large parts of the north-central Greenland ice sheet are melting from below. It has been argued that basal ice melt is due to the anomalously high geothermal flux that has also influenced the development of the longest ice stream in Greenland. Here we estimate the geothermal flux beneath the Greenland ice sheet and identify a 1,200-km-long and 400-km-wide geothermal anomaly beneath the thick ice cover. We suggest that this anomaly explains the observed melting of the ice sheet’s base, which drives the vigorous subglacial hydrology and controls the position of the head of the enigmatic 750-km-long northeastern Greenland ice stream. Our combined analysis of independent seismic, gravity and tectonic data, implies that the geothermal anomaly, which crosses Greenland from west to east, was formed by Greenland’s passage over the Iceland mantle plume between roughly 80 and 35 million years ago. We conclude that the complexity of the present-day subglacial hydrology and dynamic features of the north-central Greenland ice sheet originated in tectonic events that pre-date the onset of glaciation in Greenland by many tens of millions of years.”

Below are four older scientific papers also indicating that the source of the rapid melt water production in northern and central Greenland is significantly related to high geothermal heat origins:

Age-depth relations from internal layering reveal a large region of rapid basal melting in Greenland. Melt is localized at the onset of rapid ice flow in the large ice stream that drains north off the summit dome and other areas in the northeast quadrant of the ice sheet. Locally, high melt rates indicate geothermal fluxes 15 to 30 times continental background. The southern limit of melt coincides with magnetic anomalies and topography that suggest a volcanic origin.”

Introduction: [T]here is a growing body of evidence suggesting more extensive basal melting in the central region of northern Greenland.  Fahnestock et al. [2001a] determined age-depth relationships and basal melt rate from ice-penetrating radar in northern Greenland and detected high basal melt, in places up to 0.2 m/yr, under the onset region of the Northeast Ice Stream and its southern tributaries. This basal melt requires a geothermal heat flux much greater than the estimated continental background of 57 mW/m2  [Sclater et al., 1980],and Fahnestock et al., [2001a]  speculate that the inferred large heat flow may be of volcanic origin. Similarly, at the base of the NGRIP deep ice core, drilled on the ice divide 170 km northwest of the onset region of the Northeast Ice Stream, the observed basal temperature is at the pressure-melting point [Anderson et al., 2004; Dahl-Jensen et al., 2003]. The basal melt rate at NGRIP reaches 7.5 mm ice per year, and the modeled geothermal heat flux is between 90 and 160 mW/m2 along the flow line originating 50 km upstream of the drill site [Dahl-Jensen et al., 2003].  Again, the origin of the large geothermal heat flux remains unidentified. Ice-penetrating radar profiles show bright bed reflections in many locations in northern Greenland, indicating the presence of lubricating meltwater at the glacier base.”

From temperature measurements down through the 3001 m deep borehole at the North Greenland Icecore Project (NorthGRIP) drill site, it is now clear that the ice at the base, 3080 m below the surface, is at the pressure-melting point. This is supported by the measurements on the ice core where the annual-layer thicknesses show there is bottom melting at the site and upstream from the borehole. … The results show the geothermal heat flow varies from 50 to 200 mW m-2 along the 100 km section of the modeled flowline. The melt rate at the NorthGRIP site is 0.75 cm a-1, but the deep ice in the NorthGRIP core originated 50 km upstream and has experienced melt rates as high as 1.1 cm a-1.”