Meteorologist Joe Bastardi at Twitter posted a chart from Scripps Oceanography Institute, which does put out some excellent work despite a fair amount climate science activism from a few of its scientists.

According to the Weatherbell meteorologist, Scripps has forecast a La Niña under -2.0 over five consecutive month, as the following chart shows: 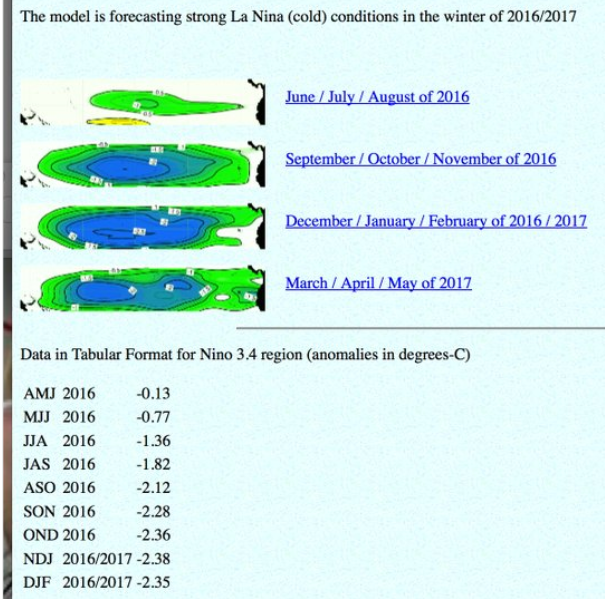 While it’s still questionable that the La Niña will arrive already this summer, there is rapidly diminishing doubt that it will be hitting the globe hard by wintertime. Joe adds:

The implication of the SCRIPPS forecast with the ONI is it would more than counter the recent strong el nino, over a multi year period”

Eastern tropical Pacific sea surface temperatures have cooled significantly in the past fortnight, and are now approaching neutral levels. As temperatures under the surface are below average, more surface water cooling is expected. However the atmosphere is only slowly responding to these changes, and hence the Southern Oscillation Index (SOI) and cloudiness near the Date Line continue to fluctuate around El Niño thresholds.

Six of eight international climate models suggest the tropical Pacific Ocean will return to neutral levels within the next month. By September, seven of eight models suggest La Niña thresholds are likely. However, individual model outlooks show a large spread between neutral and La Niña scenarios.”

The following chart from Wikipedia gives an overview of all La Niña events occurring since 1900.

Note how in the above figure a lack of La Niña events persisted from 1976 to 1998, a time that saw the globe warm some 0.6°C. Since 1998 the frequency of La Niña events has increased with global temperatures remaining flat. Back in the early to mid 1970s, a time of frequent La Niña events, much of the media warned of a coming little ice age. For example in 1974 German Spiegel news magazine warned that the chances of warming were less than 1 in 10,000! A number of scientists sounded the ice age alarms, blaming it in part on sinful human activity.

By 1986, with La Niña events having been absent close to 10 years, Spiegel flipped and began its spectacular warnings of global warming, showing a semi-submerged Cologne Cathedral on the cover of a 1986 magazine. by 1988, James Hansen was before Congress prophesizing the end of the world.

The oncoming La Niña in combination with weakened solar activity and a flip towards the cool phase by the Atlantic Multidecadal Oscillation (AMO) may soon be all working in tandem to set up months of global cooling ahead, which means a likely resumption in the overall global warming pause over the latter part of the current decade.

Global temperature over the years ahead will hinge in part on how frequently La Niña events occur.