Analysis Indicates The Real Cause of Recent Warming Is Not CO2

I would like to thank a faithful warmist commenter for inspiring this research.

His claim for my mental state seen here, in The 85-year Pause, forced me to “put up, or shut up” on the subject of warming seasonality and the reasons for it. To that end, I added many more stations to my list to be examined, and plotted monthly data instead of just two seasons.

First, some discussion on CO2 warming theory, a subject on which this faithful warmist commentator claims some expertise. I searched the web for any illustrations of monthly downward long-wave radiation. I finally found them at ScienceOfDoom.com, here. Please click on the link.

Twelve different stations are shown, with modeled and observed month-of-year data. The data for each of these stations closely matches the local insolation (sunshine hours), with a maximum in the local summer, especially for polar and middle latitudes.

One would think, that with more downward IR in the local summer, and with increasing CO2, that the resulting warming would be in the summer also. That is not the case.

Some signal theory: electrical engineers, physicists, and technicians that have ever used a digital oscilloscope will be familiar with signal averaging. When a faint signal is synchronous with a larger signal, triggering the oscilloscope on the larger signal and averaging many times will bring out the faint signal even in the presence of large random noise. In this case, the annual CO2 warming signal synchronized with the months of the year in the presence of weather.

Based on the hours of daylight for each month, here is an example of what the CO2 warming should look like for Bismarck, North Dakota, and the stations around it: 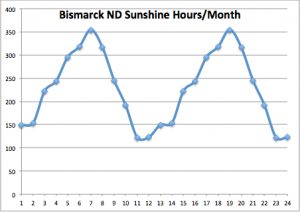 Figure 1: Number of sunshine hours per month for Bismarck, North Dakota, USA. The peak is in July, the low point is in November and December. The months of the year are numbered from January with two years shown. The source link is here. Click on Climate Data For Bismarck Airport.

Here is the result for 8 stations in North Dakota, USA. The “adjusted” data was used for all plots. As GISS uses the same adjustments for all months of the same year, the other data sets would only move these plots vertically by small amounts without changing the shape. 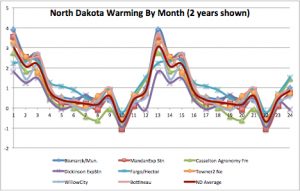 Figure 2: Warming by month for 8 stations in North Dakota. Two years are shown to show a full winter in the center of the plot. The months are numbered from January. These stations are all within a few hundred kilometers of each other, so show very similar trends. The dark red trace is the average. The peak is in January.

Thirteen Russian stations were examined in the same fashion. This area is supposedly warming faster than anywhere else according to the temperature anomaly maps from GISS. These stations are spread across the nation from Moscow to eastern Siberia. There was more variation here, so a plot of all 13 is a classic spaghetti diagram. Here is a plot of the 13 stations with the average highlighted in black. Moscow (Moskva) is in slightly bolder red. 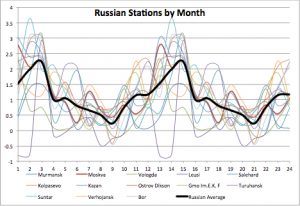 Figure 3: Plot of the average monthly warming for 13 Russian stations. Two years are shown. The months with the most warming are January, February, and March. 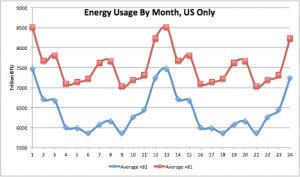 Figure 4: Energy usage in the United States by month of the year. The top curve is the average energy usage after 1980; the bottom curve is energy usage from 1970 to 1980, the only monthly data available from the U. S. Energy Administration here.

Here are 12 more stations in the U. S. Midwest and South. The black line is the average. 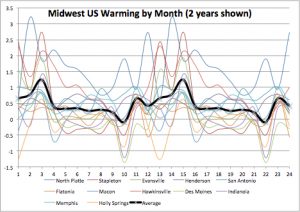 Figure 5: Plot of the by-month warming in 12 locations in the US mid-west and south.

In the US midwest and south, the least warming (slightly cooling) is in October. The peak warming is March. All the cities have peak warming between November and March, completely out of sync with any possible CO2 warming and in sync with residential heating.

These diagrams all show a large negative spike in either September (Russia) or October (in the US). Why should this be? These are the months where the air conditioners are turned off and the heating has yet to be turned on, thus they are the months with the least energy use.

There is no way that CO2 is causing this warming in the winter months. If CO2 was the culprit, we would see warming following the diagrams linked above on the SOD website. The back-radiation from CO2 is real. It just doesn’t have any effect, or the effect is offset by something else. Instead we see warming following energy use. We can keep the climate from warming. But it means freezing to death.