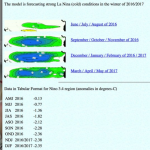 Share this…FacebookTwitterMeteorologist Joe Bastardi at Twitter posted a chart from Scripps Oceanography Institute, which does put out some excellent work despite a fair amount climate science activism from a few of its scientists. According to the Weatherbell meteorologist, Scripps has forecast a La Niña under -2.0 over five consecutive month, as the following chart shows: […] 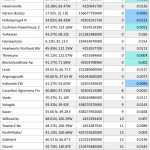 Share this…FacebookTwitterBy Ed Caryl Yes, you read that right. There has been NO warming in 85 years. There are many surface land stations with records going back more than 100 years. Some records exist back to 1880 and earlier. GISS cuts the records off at 1880. There are many gaps in these records before 1930, […]

Unsustainable Folly: Cost Of Germany’s “Energiewende” To Soar To €31 Billion In 2016 Alone!

Share this…FacebookTwitterAccording to the Institute of German Business (IW) the cost of Germany’s once highly touted “Energiewende” (transition to green energy) will soar to a whopping €31 billion ($35 billion) in 2016 alone, thus further burdening the already ailing German consumer. Hat-tip: Gerti. That’s a huge sum of money for the country of 80 million citizens. So, […]

Share this…FacebookTwitterIt’s early May and most of the oaks in northern Germany are just beginning to see their leaves come out. Spring has definitely arrived late this year. Fortunately that is about to change as warm temperatures are forecast for upcoming long holiday weekend. Germany’s DWD national weather service has published the preliminary weather results […]

Share this…FacebookTwitterPaul Dorian of the excellent weather science site Vencore Weather here brings us up to date on the latest on one of the most powerful natural cycles driving our North Atlantic climate: North Atlantic sea surface temperature (SST) cycles. Here I’ll sum up the main points. Of course do read the entire post at Vencore for […]