According to scientists, ocean temperatures have fluctuated up and down within a range of around 1 to 2°C for the last 1,000 years.

During the Medieval Warm Period (~800 to 1,000 years ago) ocean temperatures were as warm or warmer than they are now.  This centennial-scale warming occurred during a period of high solar activity, or during the Medieval Maximum.

During the Modern Warming Period (1900-present), ocean temperatures have risen again.  This warming has coincided with a period of very high solar activity, the Modern Grand Maximum.

Below are several papers indicating that ocean temperatures have risen and fallen for the last 1,000 years in concert with solar activity, including the 20th Century Modern Grand Maximum.  As Sejrup et al. (2010) cogently write in the conclusion of their paper:

“The associated decade- to century-scale variation of estimated nSST [near sea surface temperature] ranges from 1 to 2°C, significantly larger than expected based on thermodynamic considerations alone. We suggest that this is due to a solar influence on the regional modes of atmospheric variability which, in turn, control the poleward transport and temperature of warm Atlantic surface waters. Our findings beg the question of why such a clear connection has not been detected previously.”

“[I]n the last 1000 years solar activity displayed a Great Medieval Maximum, 1100 – 1250 AD, followed by a period of lower solar activity until the start of the 20th century. … The Oort, Wolf, Spörer, Maunder, and Dalton Minimums have been identified, as have the Medieval Maximum and the so-called Modern Maximum, starting near 1900.”

“The longest direct observation of solar activity is the 400-year sunspot-number series, which depicts a dramatic contrast between the almost spotless Maunder and Dalton minima, andthe period of very high activity in the most recent 5 cycles [1950s – 2000s], prior to cycle 24. … The records show that solar activity in the current cycle 24 is much lower than in the previous three cycles 21–23 revealing more than a two-year minimum period between cycles 23 and 24. This reduced activity in cycle 24 was very surprising because the previous five cycles were extremely active and sunspot productive forming the Modern Maximum.  … We predict correctly many features from the past, such as: 1) an increase in solar activity during the Medieval Warm period; 2) a clear decrease in the activity during the Little Ice Age, the Maunder Minimum and the Dalton Minimum; 3) an increase in solar activity during a modern maximum in 20th century.”

“[T]he modern Grand maximum (which occurred during solar cycles 19–23, i.e., 1950–2009) was a rare or even unique event, in both magnitude and duration, in the past three millennia. Except for these extreme cases, our reconstruction otherwise reveals that solar activity is well confined within a relatively narrow range.”

Response of Norwegian Sea temperature to solar forcing since 1000 A.D.

“Here we present an exceptionally well-dated marine sediment sequence in the eastern Norwegian Sea which records 1–2°C variations of temperature in northward flowing Atlantic waters that are robustly correlated with various estimates of solar activity spanning the last 1000 years. The temperature and solar proxy variations appear to be synchronous within dating errors, which, together with the large amplitude of the temperature signal and its correlation into central Europe, suggests strong coupling of the regional atmospheric and oceanic responses to the Sun. … Lowest isotope values (highest temperatures) of the last millennium are seen ∼1100–1300 A.D., during the Medieval Climate Anomaly, and again after ∼1950 A.D. The largest and most sustained isotopic increases (coolings) are centered at ∼1500 A.D. and ∼1700 A.D., corresponding to the regional Little Ice Age. … The presence of medieval and 20th century warmth and Little Ice Age cooling in our records suggests a possible connection to known solar variations at these times (i.e., the Spører and Maunder minima and medieval and modern maxima, respectively). …  For the period after 1500 A.D., during which we have greatest confidence in the sediment age model, correlations with the various solar proxies range from ∣R∣ = 0.71 to 0.87 (all significant at >99%). … On balance, the observed relationship of nSST and solar proxies suggests a climate response to the Sun within the characteristic inertial timescale of the upper ocean, which is one to several decades. Recurrent, episodic volcanic forcing may also influence the ocean climate signal at this timescale, however, our results indicate that approximately 50–70% of the observed multidecadal to century-scale δ18O variation may be explained by solar forcing alone.”

Conclusion: “We have presented an oxygen isotopic proxy record of near-surface temperature of Atlantic waters from the area of their primary flow into the eastern Norwegian Sea and find that it is robustly and near-synchronously correlated with various proxies of solar variability spanning the last millennium. The associated decade- to century-scale variation of estimated nSST ranges from 1 to 2°C, significantly larger than expected based on thermodynamic considerations alone. We suggest that this is due to a solar influence on the regional modes of atmospheric variability which, in turn, control the poleward transport and temperature of warm Atlantic surface waters. Our findings beg the question of why such a clear connection has not been detected previously.”

“[C]entennial-scale sea surface temperature (SST) oscillations of 2–3 °C occurred during the past 1–2 [thousand years].  Two multidecadal intervals of sustained high Mg/Ca indicate that Gulf of Mexico sea surface temperatures (SSTs) were as warm or warmer than near modern conditions between 1000 and 1400 yr B.P. [before present] Foraminiferal Mg/Ca during the coolest interval of the Little Ice Age (ca. 250 yr B.P.) indicate that SST was 2–2.5 °C below modern SST.“

“Four minima in the Mg/Ca record between 900 and 250 yr B.P. correspond with the Maunder, Spörer, Wolf, and Oort sunspot minima, suggesting a link between changes in solar insolation and SST variability in the Gulf of Mexico.”

“Here we present new data from the Ross Sea, Antarctica, that indicates surface temperatures were ~ 2 °C colder during the LIA, with colder sea surface temperatures in the Southern Ocean and/or increased sea-ice extent, stronger katabatic winds, and decreased snow accumulation.   The McMurdo Dry Valleys [Antarctica] were 0.35°C warmer during the MWP than during ME [modern era], accompanied by warmer conditions in the Ross Sea.”

“We show that water masses linked to North Pacific and Antarctic intermediate waters [0-700 m] were warmer by 2.1 ± 0.4°C and 1.5 ± 0.4°C, respectively, during the middle Holocene Thermal Maximum than over the past century. Both water masses were ~0.9°C warmer during the Medieval Warm period than during the Little Ice Age and ~0.65° warmer than in recent decades.” 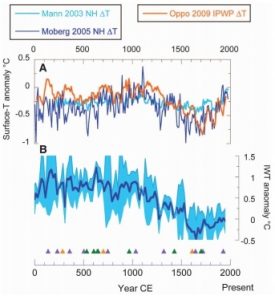 “[T]he tropical Indo-Pacific warm pool (IPWP) represents a major heat reservoir that both influences global atmospheric circulation and responds to remote northern high-latitude forcings. Here we present a decadally resolved continuous sea surface temperature (SST) reconstruction from the IPWP that spans the past two millennia and overlaps the instrumental record.  Reconstructed SST was, however, within error of modern values from about ad 1000 to ad 1250, towards the end of the Medieval Warm Period. SSTs during the Little Ice Age (approximately ad 1550–1850) were variable, and 0.5 to 1 °C colder than modern values during the coldest intervals.”

“Warm and stable conditions with relatively strong influence of the Irminger Current on the North Icelandic shelf are indicated during the interval AD 940–1300, corresponding in time to the Medieval Warm Period (MWP). A considerable cooling at ∼ AD 1300 indicates the transition to the Little Ice Age (LIA) with increased influence of Polar and Arctic water masses deriving from the East Greenland and East Icelandic currents. An extended cooling period between AD 1300 and 1910 is characterized by approximately century-scale oscillations, with marked cold intervals at AD 1325–1375, AD 1460–1500, AD 1610–1670 and AD 1810–1910, separated by relatively mild spells. A two-step warming during the last 100 years is interrupted by three cool events around AD 1920, in the AD 1960s and in the late AD 1990s.”