Share this…FacebookTwitterThe greatest obstacle to wind energy is its unreliable, weather-dependent supply. If the wind stops blowing, then it’s lights out! Image cropped from: www.youtube.com/kGXoE3RFZ8 Yet, proponent’s often claim the solution is offshore, for example out in the tempestuous North Sea. There the wind is always blowing, they like to tell us. Unfortunately this too is […]

Share this…FacebookTwitterGerman climate and weather analyst Schneefan here Looks at the current ENSO conditions. What follows are excerpts of what he presents. =================================== The global cooling weather phenomenon La Niña in the equatorial Pacific is steadily increasing in strength – and the NOAA has not recognized this: NOAA Cancels La Niña Watch While La Niña […]

Share this…FacebookTwitterHigh profile German food chemist Udo Pollmer here at German public radio brings the following video to our attention. In the video biologist and public speaker Allan Savory tells an audience how climate change and desertification has a lot more to do with the elimination of roaming herd animals over grasslands and vegetated areas over […]

Posted in Drought and Deserts | 15 Responses 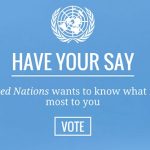 Share this…FacebookTwitter Over the last few years, the United Nations has been conducting an online poll, asking the world’s citizens —well, those fortunate enough to have access to electrical power, a computer, and the internet — what is most important to them, what concerns them most, or what issue they view as the highest priority […] 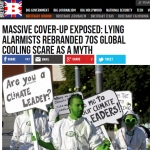 Breitbart London: “Full Extent Of Skullduggery” By “Cabal Of Lying Climate Alarmists” Has Been Uncovered”!

Share this…FacebookTwitterKenneth Richard’s post from yesterday on how a small group of alarmist scientists tried to whitewash away the global cooling scare of the 1970s has been making some waves. Not only was it made the top headline at Climate Depot, but also James Delingpole at Breitbart London here has written a scathing piece about the fraudulent, […] 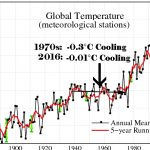 Share this…FacebookTwitter Beginning in 2003, software engineer William Connolley quietly removed the highly inconvenient references to the global cooling scare of the 1970s from Wikipedia, the world’s most influential and accessed informational source. It had to be done.  Too many skeptics were (correctly) pointing out that the scientific “consensus” during the 1960s and 1970s was […]

Another One Of Climate Science’s Central Claims To Go Down In Flames Tomorrow – Stay Tuned!

Share this…FacebookTwitterToday I can only offer a trailer on what will be published tomorrow, as the finishing touches are still ongoing. Over the past weeks NTZ has assisted in a comprehensive analysis of a large body of climate science literature. At this point I can only say that the results have one climate science’s central […]

Share this…FacebookTwitterGermany’s leading climate alarmism site “Klimaretter” (Climate Rescuer) recently fretted that the German government has quietly watered down the country’s climate protection policy and targets for the coming decades. In short, Germany is walking away from its climate protection commitments declared in Paris. The site describes Germany’s plan to reduce CO2 emissions by 2050 […]

Share this…FacebookTwitterIt has by now become common practice for just about any and every unusual weather occurrence, extreme temperature anomaly,  or seismic event to be somehow, someway linked to the human practice of using energy derived from fossil fuels.   No hurricane, flood, drought, storm, wildfire … is spared from potential anthropogenic implication. Last week, a named […] 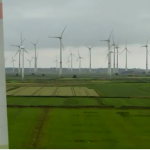 Share this…FacebookTwitterGerman flagship ARD public television recently broadcast a report on Germany’s Energiewende called: “The Battle Over Wind Turbines” Meet the Schmidt’s in northern Germany. The family, like many Germans, once welcome wind turbines and viewed them as a responsible way to produce energy in an environmentally and climate friendly way. Today the ARD reports that […]