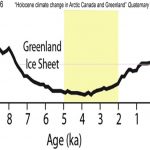 Share this…FacebookTwitterFifteen international scientists recently collaborated to assemble one of the most comprehensive analyses of temperature and ice sheet changes for Greenland and the Canadian Arctic ever produced.  Briner et al., (2016) synthesized over 100 records from a large and accumulating database to publish “Holocene climate change in Arctic Canada and Greenland” in the journal […]