Germany is in shock after yesterday’s terrorist attack on a Berlin Christmas market, which is a stark symbol of German culture. The latest figures show 12 dead and 48 injured – some seriously. Also the Polish driver of the hijacked truck allegedly was killed.

Already accusations are flying back and forth, with some on the right claiming Merkel bears some responsibility for the attacks by allowing a tsunami of immigrants to flood across Germany uncontrolled in 2015. Meanwhile Merkel proponents and the media are accusing the right of exploiting the tragedy for political gains. 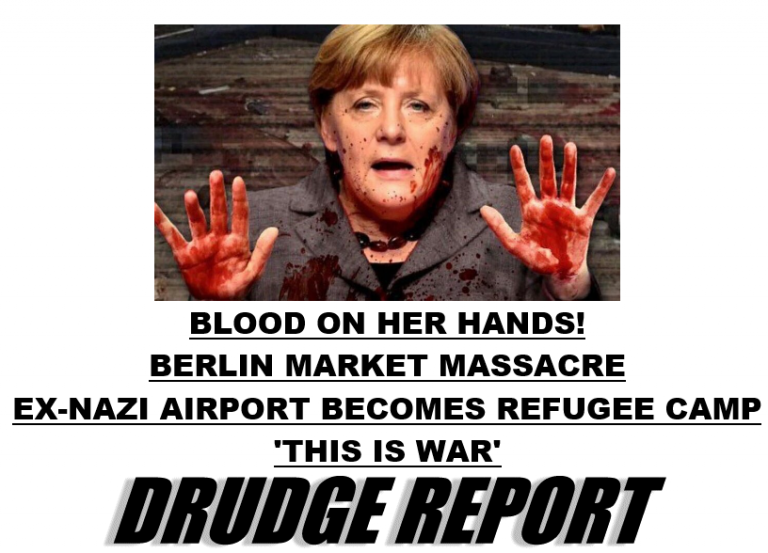 Amid the tragedy there’s the horrible irony that just some three months ago German national daily Die Welt here published a piece with the title:

Die Welt reported that Merkel was working hard to “rapidly integrate the refugees” and called on industry to get involved. Merkel said that refugees would be able to trade in their driver’s licenses for a German one for 500 euros, but that of course loans need to be offered to help them finance it. Paying back the loan should be no problem, Merkel said:

When one earns, he can then pay this 500 euros back. Everywhere truck drivers are being sought.”

Merkel’s idea, it seems, is to give tens of thousands of Middle Eastern refugees driver licenses for semis.

The latest attacks is just the most recent in a series that have plagued the country since the recent wave of refugees.

Just two days ago, on Sunday, a Munich woman was raped and nearly beaten to death while jogging in the famous English Garden. The police were shocked by the sheer brutality of the attack. Currently there is no evidence linking the attack to a migrant.

In November, a 24-year old was attacked and raped in Munich as well.

Just weeks earlier the highly publicized case of the rape and murder of a 19-year-old medical student at the hands of a teenage Afghan refugee sparked outrage against the “open door” asylum policy of Chancellor Angela Merkel. The student was the daughter of EU parliamentarian and had done volunteer work for refugees.

Other terrorists attacks have occurred, with 4 being stabbed on a train earlier this year.

In one of Germany’s worst attacks, hundreds of women were sexually assaulted, attacked or robbed at New Year’s eve festivities in Cologne.

The UK tabloid “The Sun” here presents a summary of this year’s bloody attacks in the country.

The media, who are cozily in bed with Germany’s ruling grand coalition government, have been falling all over themselves praising the “calmness and professionality” of the authorities in dealing with the aftermath of the attack. Indeed they have done an excellent job. But one gets the sense that the praise is being used to distract the public’s attention from the government’s initial immigration policy failure and fiasco that led to the uncontrolled tsunami of “refugees” in the first place back in 2015.

Germany’s heightened security threat and overall anxiety would not exist today had it not been for the German government’s and EU’s border negligence.

Germany’s sense of freedom and security have been violated. Citizen’s have had to change their habits and attitudes with respect to public safety. Citizens, especially women, no longer feel safe outside after dark and are opting to stay home. And those that wish to continue on as before now must summon up the courage to do so, knowing full well that public places and events are now targets. The carefree days are over, squandered by Merkel’s misguided do-gooding.

Increasingly Merkel is coming under massive fire for a string of policy failures over the past years that include the refugee crisis, renewable energy flop, Greece bailout, frayed relations with Russia and Turkey, European Union collapsing, and the slander of dissident views.