About two weeks ago, NOAA released the annual version of their latest Arctic Report Card.  Of course, the usual media outlets peddled the requisite doomsday headlines when describing the report’s contents, deploying words like grim  and dire  and pedantically issuing a failing grade so as to paint a picture of an Arctic climate teetering on the brink of catastrophe.

It was on page 33 that the authors divulged the Greenland Ice Sheet’s mass balance statistics for 2015-’16.

For 2013-’14, the mass loss for the Greenland Ice Sheet was even lower: just -6 Gt.  In other words, the ice sheet was essentially in balance.

A Rapid Deceleration In Greenland Ice Sheet Mass Loss Since 2012

Now here’s where it gets interesting.  For their 2013 report card, NOAA authors wanted to accentuate just how profound the loss of ice mass had been for the 2008-2012 period compared with the 2002-2006 period.  This way, they could point to a rapid acceleration of ice sheet mass loss.

As some may have noticed, NOAA curiously uses different starting and ending months for each demarcated period, making direct data comparisons difficult (due to different gain/melt rates depending on the month).  Instead of comparing September to September every year (as they did in 2008-’12), they’ve compared April to April in some years, June to June in another year, and June to July in still another 4-year-long selection.  And they’ve ignored the melt record for 2007 altogether in the above analysis when comparing 2002-2006 to 2008-2012.   NOAA wouldn’t dare “move the goal posts” by cherry-picking different start and end points depending on the melt rates for specific months so as to bolster their claims of “acceleration” would they?   That would imply operating with a tendentious agenda rather than objectively reporting the data.   Would they do that?

But instead of digressing to discuss their odd “selectivity” with regard to choosing some months or years to start and end with instead of others, we will just accept NOAA’s methodology and analyze the yearly averages as originally reported.

So according to present and historical NOAA Arctic Report Cards we have  the following rates of annual Greenland Ice Sheet mass loss for 2002-2016: 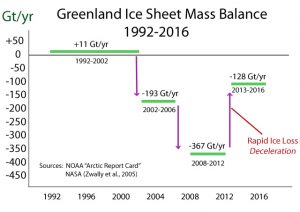 Notice the dramatic rate of deceleration (by two-thirds) in Greenland Ice Sheet mass loss averages for recent years on the graph above, contradicting the reports of a perpetually increasing ice loss acceleration.

And the slowing mass loss rate has continued in 2016-’17.  According to DMI monitoring, the Greenland Ice Sheet is gaining ice substantially above the long-term average in the last 3-4 months.  It is highly likely that by the end of the record, the 2016-’17 mass loss will be significantly less than 200 Gt/yr, and perhaps less than 100 Gt/yr again.

Some may counter the above analysis by claiming that even losing 100 to 200 Gt of ice per year is still quite substantial and concerning, and thus the alarmist headlines are merited.   But this perspective ignores history.

First, estimates of surface mass balance for the Greenland Ice Sheet almost invariably use the 1961-1990 period as a baseline, as it is assumed that the ice sheet was essentially in balance (no net losses or gains) for those 30 years.  As records have shown, though, the 1961-1990 baseline period was the coldest decadal-scale stretch since the 1800s for Greenland, which means that the 1995-to-present Arctic warming trend is being directly compared to a very cold period for the Greenland ice sheet rather than a more representative period.  In fact, as indicated by several recent papers, the Greenland ice sheet’s surface mass balance was similar to or even lower during the as-warm-as-now 1920s to 1940s than it has been during the last few decades.  If the baseline period were to include Greenland’s early 20th century warm years (1920s to 1940s), the recent losses would likely be substantially smaller.

Also, let’s consider what losing, say, 150 Gt per year actually means in terms of its environmental impact.   According to Shepherd et al. (2012), the Greenland Ice Sheet lost an average of -142 Gt/yr (with substantial uncertainty of ±49 Gt/yr) during the years 1992-2011.  This translates into an average of 0.4 mm/yr of sea level rise contribution from the Greenland Ice Sheet during this high-melt period.  In other words, over the entire 20-year record (1992-2011), the Greenland Ice Sheet contributed to sea level rise at a rate of 4 centimeters (1½ inches) per century.  That’s it.  That’s what a loss of -142 Gt per year multiplied by 20 years translates into.

Finally, as mentioned above, scientists presume the Greenland Ice Sheet was in balance during the 1961-1990 period, which is why it is used as the baseline reference period for surface mass balance estimates.  If that’s the case, there is no reason why estimates of the human impact on the Greenland Ice Sheet’s mass balance should not extend back to 1961 too.  Or even 1951.  After all, the IPCC has indicated in their latest (2014) synthesis report that the overwhelming (“more than half”) anthropogenic influence on climate commenced that particular year:

“It is extremely likely more than half of the observed increase in global average surface temperature from 1951 to 2010 was caused by the anthropogenic increase in greenhouse gas concentrations and other anthropogenic forcings together.”

So if we were to include the ~40 years of majority anthropogenic influence between 1951 and 1991 that apparently saw no net change in Greenland Ice Sheet mass balance with a (rounded up) combined mass loss rate of -150 Gt/yr between 1992 and 2016, the total human impact on the mass balance of the Greenland Ice Sheet might amount to an annual loss average of -55 to -60 Gt for the entire 65-year period.  That’s a rate of contribution to sea level rise of about 1 ½ centimeters per century since 1951, or since humans allegedly began causing the majority of global warming.

Since a headline that reads “Humans Have Caused Greenland’s Ice To Melt At Rate That Adds 1 ½ Centimeters Per Century To Sea Levels!” probably wouldn’t be effective in grabbing readers’ attention, it’s understandable why journalists and advocates for the cause would prefer to use doomsday language instead.  It’s also understandable why they’d prefer to gloss over the recent deceleration in Greenland Ice Sheet mass loss found in the latest Arctic Report Card.  It sounds so much scarier to write about the hundreds of billions of tons of ice lost instead.