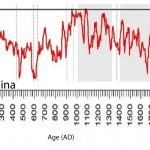 Share this…FacebookTwitter One of the oft-stated “truths” for advocates of the position that humans are predominantly responsible for climate changes is that the Sun could not have played more than a negligible role in the global warming of the last few centuries. Indeed, the latest Intergovernmental Panel on Climate Change (IPPC) report theorizes that the […]