Browse: Home / 2017 / February / 16 / Most Polar Bears Live In Canada, Where There Has Been No Net Warming For Centuries. So Why Are They Endangered?

Most Polar Bears Live In Canada, Where There Has Been No Net Warming For Centuries. So Why Are They Endangered?

The habitat range for polar bears extends across the circumpolar boundaries of the Arctic Ocean, primarily inclusive of North America (Canada), coastal Greenland, and northern Russia (Siberia, Northern Europe).  However, about 70 percent —  13 of 19 subpopulations — of the Earth’s polar bears reside in Canada.  And Canada not only has not been warming to any unusual degree in the last few centuries, modern temperatures are still colder now than they have been for most of the last 10,000 years.

The media-popularized viewpoint that insists polar bears are sweltering under an imminent threat of extinction due to global warming in general and Arctic warming in particular is benighted by a lack of appreciation or understanding of a long-term geological context.

For most advocates of the position that climate changes in the Arctic are predominantly caused by the explosive rise in anthropogenic carbon dioxide emissions since the mid-20th century, there is a conspicuous hyper-focus on the climate monitoring period beginning in the 1950s…or the late 1970s, when the satellite era began (and polar sea ice could be monitored).  The problem with this short-term perspective, of course, is that the 1950s to 1980s were a cold period in the Arctic, so any trend line beginning in those years will skew towards the point of view that more recent warming is unusual, if not unprecedented.  As the graphs below illustrate, the 1920s to 1940s were a relatively warm period in the Arctic — similarly as warm as the most recent decades.  The willful selection of the coldest decades of the last 100 years as the prerequisite starting point for examining modern climatic trends is reflective of the tendentious narrow-mindedness afflicting most advocates of the position that we humans pose a dangerous threat to the biosphere.  Expanding one’s perspective and focus beyond the last 60 or 70 years, or even a cursory look at the long-term climatic context as presented in the scientific literature, severely undercuts the perspective that recent climate changes in the Arctic are unusual, remarkable, or unprecedented. 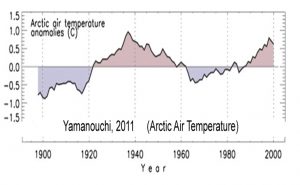 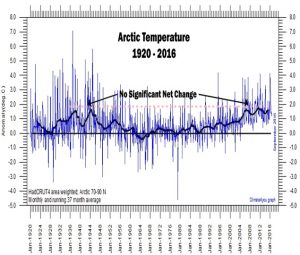 Using A Long-Term Context, Canada Has Not Been Warming

A few million years ago, the Canadian Arctic’s mean annual temperatures were about 18°C warmer than they are now.  During the summers many regions of the Arctic Ocean were sea-ice-free.  And yet polar bears survived these balmy, sea-ice-free climates anyway.

“[A] seasonally ice-free marginal and central Arctic Ocean was common … regionally during the early Holocene [6,000 to 10,000 years ago]. … Some species thought to be dependent on summer sea ice (e.g., polar bears) survived through these periods.”

Although not as warm as a few million years ago, the polar bears’ Canadian habitat was nonetheless multiple degrees Celsius warmer than now as recently as a few thousand years ago.  Not only that, but the “reconstructed temperatures [for the Canadian Arctic] do not indicate a warming” during the last 150 years.  In other words, the (1) modern day Arctic temperature trends, the (2) sea ice loss trend observed via satellites since the late 1970s, and the (3) modern seal-hunting practices of the “endangered” 21st century polar bear…are all well within the range of what has occurred naturally, or without human interference, for the last several thousand years.  Polar bears have survived much warmer temperatures than this in the past, and the likelihood they will continue to survive in today’s relatively cold Arctic climate is high too.

Below are samples of available climate reconstructions for Canada and other locations (Siberia, Greenland, Northern Europe) where polar bears live.  Each demonstrate that there is nothing unusual about the modern day Arctic climate…other than it may be colder than most of the last 10,000 years.  And each demonstrate that the hand-wringing about polar bear species extinction potentialities due to today’s non-global warming is, to put it bluntly, much ado about nothing.

“Biological production decreased again at ~ 2 ka and the rate of cooling increased in the past 2 ka [2,000 years], with coolest temperatures occurring between 0.46 and 0.36 ka [460 and 360 years ago], coinciding with the Little Ice Age. Although biological production increased in the last 150 yr, the reconstructed temperatures do not indicate a warming during this time. … Modern inferred temperatures based on both pollen and chironomids are up to 3°C cooler than those inferred for the mid-Holocene.” 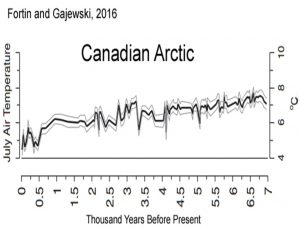 “Summer temperatures at Donard Lake [Canadian Arctic] over the past 1250 yrs averaged 2.9 °C.  At the beginning of the 13th century, Donard Lake experienced one of the largest climatic transitions in over a millennium. Average summer temperatures rose rapidly by nearly 2 °C from 1195–1220 AD [+0.80 °C per decade], ending in the warmest decade in the record (~4.3 °C).“ 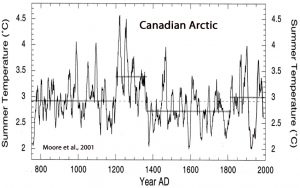 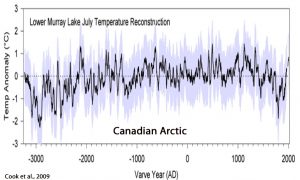 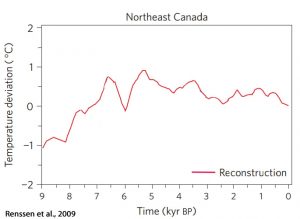 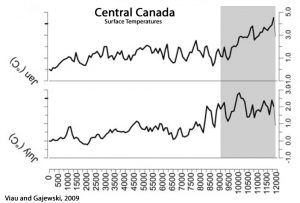 Polar Bears’ Siberian Habitat Is Colder Now Than Most Of The Last 10,000 Years 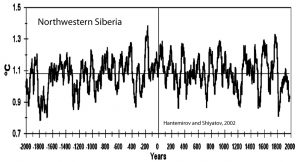 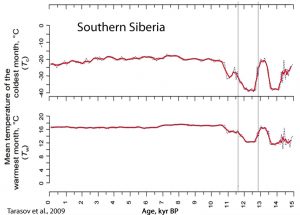 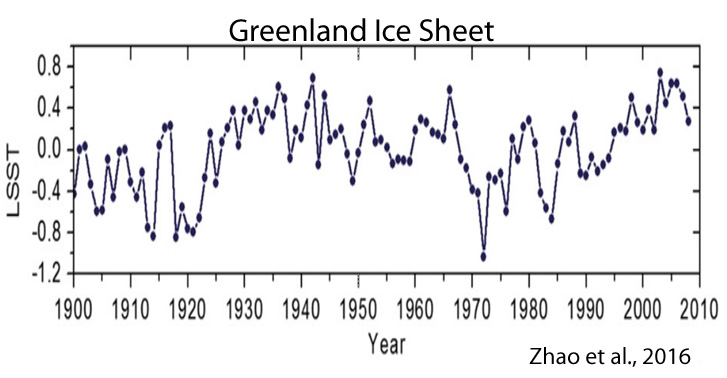 Greenland Is Colder Now Than Most Of The Last 10,000 Years 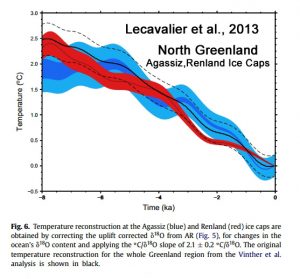 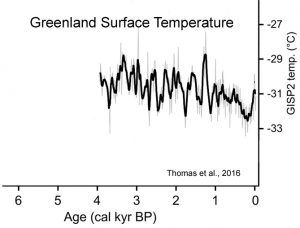 “[P]eriods warmer than modern periods occurred for ∼6.5 ka [6,500 years] including during the HCO [Holocene Climate Optimum] and Medieval Warm Period.” 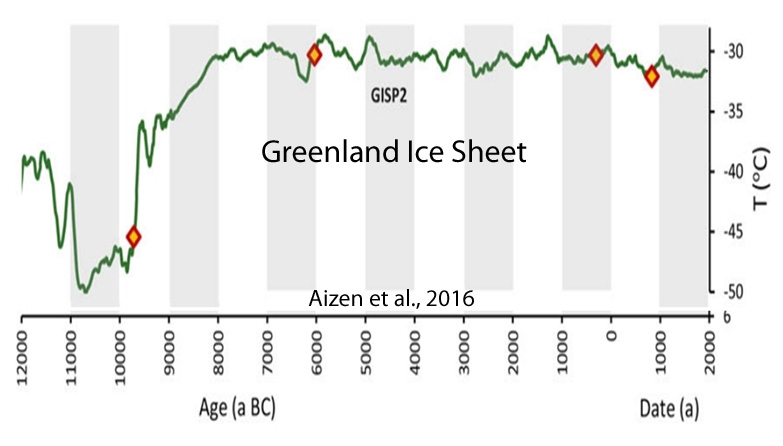 Northern Europe Is Colder Now Than Most Of The Last 10,000 Years 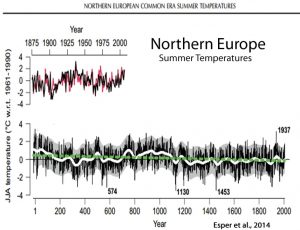 39 responses to “Most Polar Bears Live In Canada, Where There Has Been No Net Warming For Centuries. So Why Are They Endangered?”