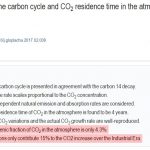 Share this… Facebook Twitter  CO2 Has Risen By 110 ppm Since 1750  The Human Contribution Is Just 17 ppm  Harde, 2017 Abstract: Climate scientists presume that the carbon cycle has come out of balance due to the increasing anthropogenic emissions from fossil fuel combustion and land use change. This is made responsible for the rapidly […]