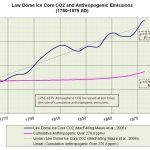 New Paper Indicates There Is More Arctic Sea Ice Now Than For Nearly All Of The Last 10,000 Years