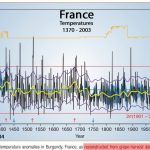 Share this…FacebookTwitterGrape Harvest Date Evidence: No Significant Modern Warmth Public domain photo. Source here In a late February (2017) interview on a U.S. news program, mechanical engineer Bill Nye claimed that the settled science says humans have been warming the planet at a rate that is  unnaturally and “catastrophically” fast since the year 1750 . […]