Firstly, wind energy protest organization vernunftkraft.de posted a chart showing the sheer absurdity of relying on the haphazard electricity supply that wind and solar energies are.

Last Sunday Germany saw windy and sunny conditions, meaning the country’s installed wind and solar systems were running at high capacity. This however led to excess power flooding into the German grid, and thus a plummet in exchange electricity prices. 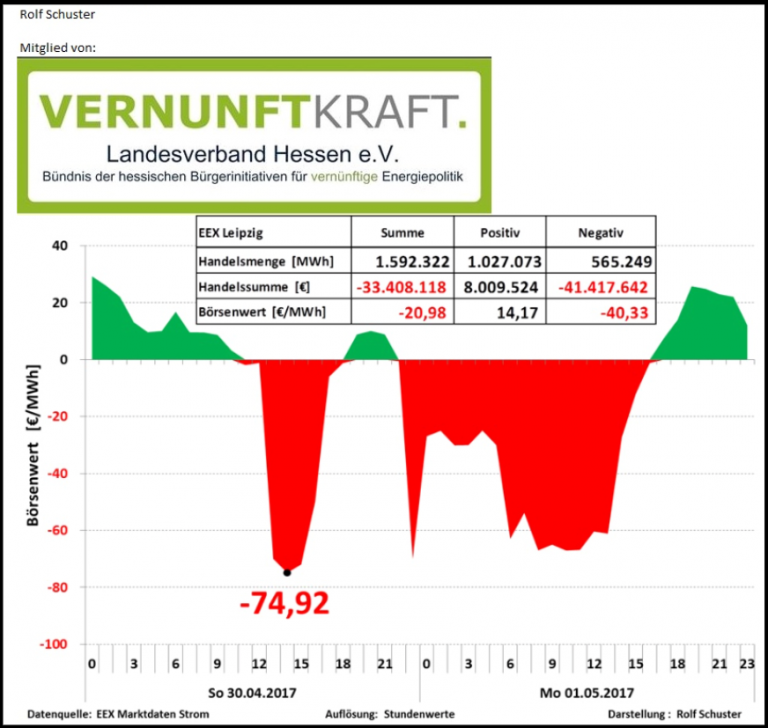 The chart above shows that electricity was in fact sold at negative prices, dipping to an astonishing low of almost 75 euros per megawatt hour.

Unfortunately the money to pay people to “buy” the electricity never gets paid to the consumer. Rather it gets paid mostly to foreign wholesalers. Yet, the German grid operator needs to recoup the money it paid to have the wholesalers to accept the power. In the end, the domestic consumers in Germany wind up with the bill.

How much did the negative prices seen over the past weekend end up costing the German consumers? One reader calculated it and came up with the figure of over 41 million euros! And because May 1st was a national holiday, the demand for German power was low, and there was no use for all the extra power flooding into the grid. It’s like cooking dinner – after everyone has already eaten. And because there is no fridge, the garbage man has to be called and paid to dispose of it. So far electricity cannot be stored on a meaningful scale.

Continuing on the folly of Germany’s renewable energy, engineering expert Dr. Detlef Ahlborn authored a post at the European Institute for Climate and Energy (EIKE), declaring the transition to renewable energies a failure and that it will remain so as long as a solution for storing the energy is not found.

Again the huge problem is the extremely erratic, uncontrolled supply of the power, as the following German wind energy supply chart clearly illustrates:

Figure 3: Wind power production Germany from 2011 to 2016. Installed rated capacity rose from about 27 GW to about 48 GW. However the power that was actually produced (dark blue) is in fact often only a tiny fraction. Overall, Germany’s demand hovers about 70 GW. Source: Rolf Schuster, data from EEX Leipzig.

More variable then rolling a die

Dr. Ahlborn describes the extreme variability of wind power in Germany as follows:

The variability of German wind power production is about 70% greater than the numbers you’d see rolling a die. If German power providers ran their plants like throwing a die, the power would flow more uniformly. [1]”

Of course wind energy proponents like to say that the solution is a European-wide integrated network where if the wind is not blowing in one region, then excess power in another region can fill in the gap. After all, “the wind is always blowing somewhere in Europe” they like to say. However, the following chart plainly illustrates that this is far more a fallacy than a truth.

Very often when there’s plenty of wind in Germany (or very little), the case is the same in the rest of Europe. With that kind of supply, good luck trying to balance any grid that is overly dependent on wind energy.

Ahlborn writes that combining the power grids to form one large one only serves to add up the variability and not reduce it.

This Energiewende [transition to renewables] is unworthy for a country with such a tradition in science and technology. We could have known if we had just given it a bit of thought. But who wanted to know?

We’ll find out at the latest when we start looking for those who are responsible for this debacle, and policymakers attempt to run from taking responsibility for this disaster. Our former economics minister has already taken the first step.”

To that, EIKE added: It can only be hoped that the former economics minister (Sigmar Gabriel) will cause less damage in his new position as foreign minister.