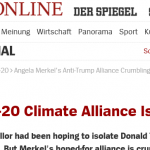 Share this… Facebook TwitterIf we can believe Spiegel, it looks like the German political-climate blitz, led by Chancellor Angela Merkel, aimed at isolating and humiliating the United States, particularly President Donald Trump, appears to have run aground. The Paris Climate Accord may be having its D-Day. Image cropped from Spiegel here According to the online English […]