In May the sun was very quiet as sunspot number was a mere 18.8, which is only 36% of what is typical for the month this far into the cycle. Seven days saw no sunspot activity at all.

The following chart shows the current cycle, Solar Cycle 24 (red), compared to the mean of the previous cycles (blue) and the similarly behaving SC 5 (black). It’s clear that the current cycle is significantly weaker than the mean and far weaker than the cycles we saw throughout most of the warming 20th century. So far there have been a number of signs indicating that upcoming SC 25 will also be a weak one. Historically periods of weak solar activity are associated with cooler periods and altered weather patterns.

The current cycle SC 24 has been so quiet that it is in fact the weakest since SC 6, which took place close to 200 years ago.

The above chart shows the accumulated monthly anomaly for each cycle this far into the current cycle. Bosse and Vahrenholt write that SC 24 has a chance, though a very small one, to overtake SC 5 and become the second weakest cycle since observations began in 1755.

Arctic sea ice has been surprising many observers lately because it has so far refused to melt like some predicted it would. Tony Heller here writes that the Northwest Passage is “blocked by very thick ice in the Beaufort Sea“. Latest sea ice extent chart shows sea ice extent being back into the statistical pack. There are even forecasts that point the melt season may be a slow one, see Weatherbell Weekend Summary.

Little wonder that a scientific global warming expedition to the Arctic had to be cancelled – due to excessive ice! James Delingpole at Breitbart reports: “Ship of Fools III – Global Warming Study Cancelled Because of ‘Unprecedented’ Ice“.

Dr. David Barber, lead scientist on the study, insisted that all the unexpected ice was caused by “climate change” — sort of like blaming obesity on a lack of calories.

Also surprising in these times of “global warming” is that northern hemisphere snow cover is well above normal as of June 15, according to Environment Canada: 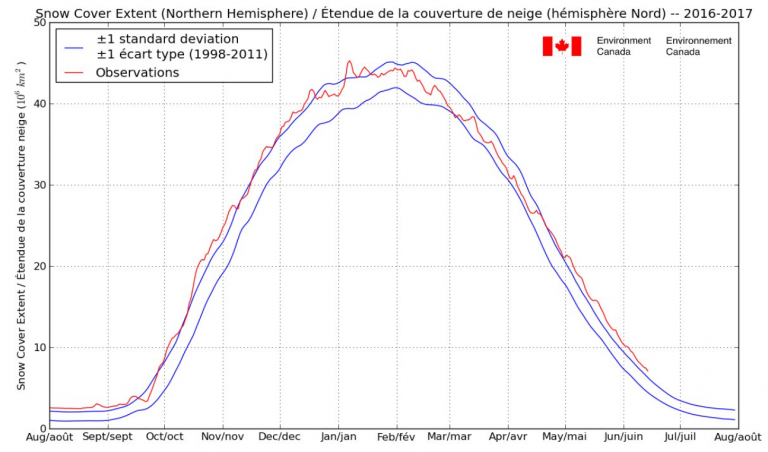 Greenland is also defying global warming. Kirye at Twitter tells us accumulated surface mass balance as computed by the Danish Meteorological Institute (DMI) is far above the mean:

At Weatherbell meteorologist Joe Bastardi reports that the forecast El Nino for 2017 has weakened considerably over the past few months. As what appears to be a curve from Scripps, the curve has gone from a powerful projected El Nino to a La Nina in just over the course of a couple of months (watch Joe’s Weekend Summary for the details). 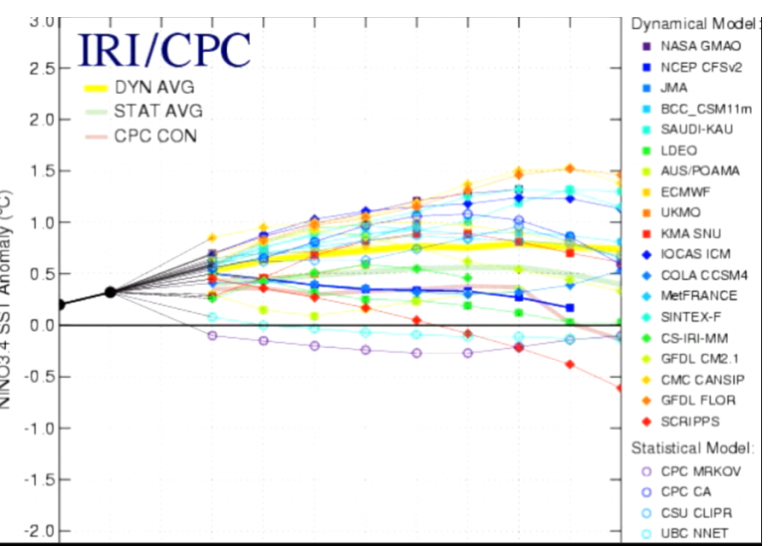 If the revised forecasts hold, a cooling globe over the coming months is likely.