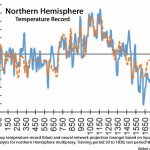 Share this… Facebook Twitter “[E]ven if there had been no industrial revolution and burning of fossil fuels, there would have still been warming through the twentieth century – to at least 1980, and of almost 1°C.” – Abbot and Marohasy, 2017 For those who ascribe to the position that humans are dangerously altering the Earth’s climate, […]