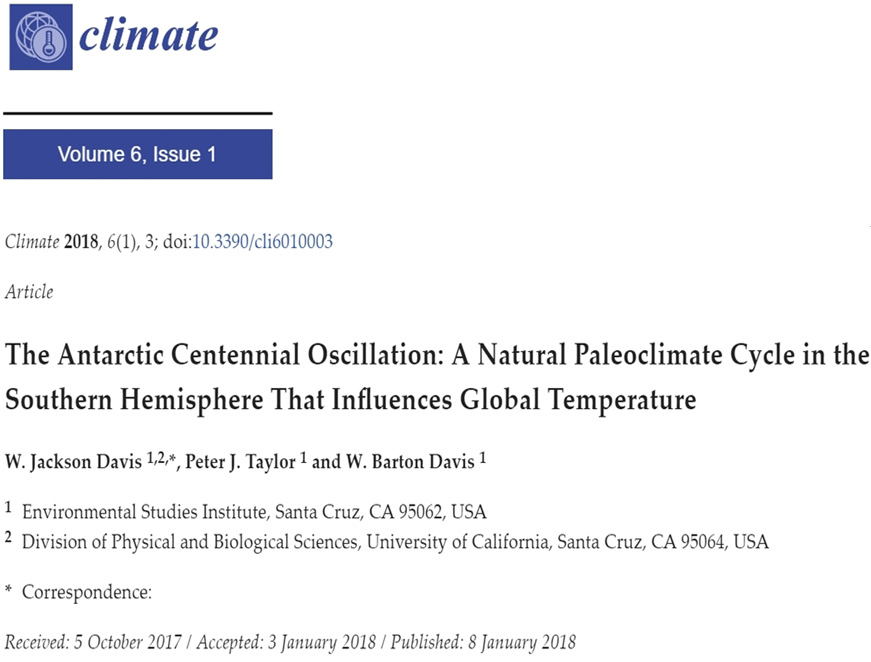 University of California (Santa Cruz) Professor W. Jackson Davis (Ph.D.), President of the Environmental Studies Institute, has published a new paper with colleagues in the journal Climate that thoroughly undermines the conceptualization of a dominant role for anthropogenic CO2 in the global warming since 1850.

Davis points out that CO2 and global temperature have been “decoupled” throughout much of geological history, and that the amplification of CO2 concentrations yields increasingly smaller radiative effects, meaning that the higher the CO2 concentration rises, the weaker its influence.

He even suggests that the reason why the anthropogenic global warming (AGW) hypothesis (it has not reached theoretical status) has been popularized is because there are reputed to be no convincing alternative explanations.

But Davis and two other University of California (SC) scientists have proposed a newly-termed alternative explanation for the 0.8°C global temperature change since 1850.  The Antarctic Centennial Oscillation (ACO) has been identified as varying in sync with solar cycles (orbital), and correlates with glacial-interglacial transitions, the 1,500-year abrupt, global-scale temperature changes (Dansgaard-Oeschger cycles), and, as the name suggests, century-scale fluctuations in global temperature.

Consequently, as the authors conclude, properties of the ACO “can explain the current global warming signal”.

[T]he contemporary global warming increase of ~0.8 °C recorded since 1850 has been attributed widely to anthropogenic emissions of carbon dioxide (CO2) into the atmosphere. Recent research has shown, however, that the concentration of CO2 in the atmosphere has been decoupled from global temperature for the last 425 million years [Davis, 2017] owing to well-established diminishing returns in marginal radiative forcing (ΔRF) as atmospheric CO2 concentration increases. Marginal forcing of temperature from increasing CO2 emissions declined by half from 1850 to 1980, and by nearly two-thirds from 1850 to 1999 [Davis, 2017]. Changes in atmospheric CO2 therefore affect global temperature weakly at most.

The anthropogenic global warming (AGW) hypothesis has been embraced partly because “…there is no convincing alternative explanation…” [USGCRP, 2017] (p. 12).

The ACO provides a possible alternative explanation in the form of a natural climate cycle that arises in Antarctica, propagates northward to influence global temperature, and peaks on a predictable centennial timetable.

We report a previously-unexplored natural temperature cycle recorded in ice cores from Antarctica—the Antarctic Centennial Oscillation (ACO)—that has oscillated for at least the last 226 millennia. Here we document the properties of the ACO and provide an initial assessment of its role in global climate. We analyzed open-source databases of stable isotopes of oxygen and hydrogen as proxies for paleo-temperatures. We find that centennial-scale spectral peaks from temperature-proxy records at Vostok over the last 10,000 years occur at the same frequencies (±2.4%) in three other paleoclimate records from drill sites distributed widely across the East Antarctic Plateau (EAP), and >98% of individual ACOs evaluated at Vostok match 1:1 with homologous cycles at the other three EAP drill sites and conversely.

The period and amplitude of ACOs oscillate in phase with glacial cycles and related surface insolation associated with planetary orbital forces. We conclude that the ACO: encompasses at least the EAP; is the proximate source of D-O oscillations in the Northern Hemisphere; therefore affects global temperature; propagates with increased velocity as temperature increases; doubled in intensity over geologic time; is modulated by global temperature variations associated with planetary orbital cycles; and is the probable paleoclimate precursor of the contemporary Antarctic Oscillation (AAO). Properties of the ACO/AAO are capable of explaining the current global warming signal.