Germany’s 2017/18 winter (December-January-February) came in moderately above normal in terms of mean temperature (+0.7°C), according to DWD German national weather service data recorded from its 2000 measurement stations scattered across the country. But February was a completely different story.

First, in a recent comment, warmist reader Seb claimed that Germany saw a “pretty ‘normal’ February”. Yet DWD here just reported that the mean temperature for the month was -1.7°C (preliminary), which is 2.7°C below the 1981 – 2010 mean.

That’s quite a bit colder than “pretty normal”. And we expect that number will be revised a tenth or so of a degree colder over the coming weeks.

What would be a surprise would your predictions of a cooling climate to become true. Let’s fast forward 5-10 years and see who will laugh at whom …”

Looking at the 30-year trend (the time period used to define climate) we see that the trend for February in Germany is clearly downward (I added the latest data point for February to the chart, which was provided by Josef Kowatsch last year): 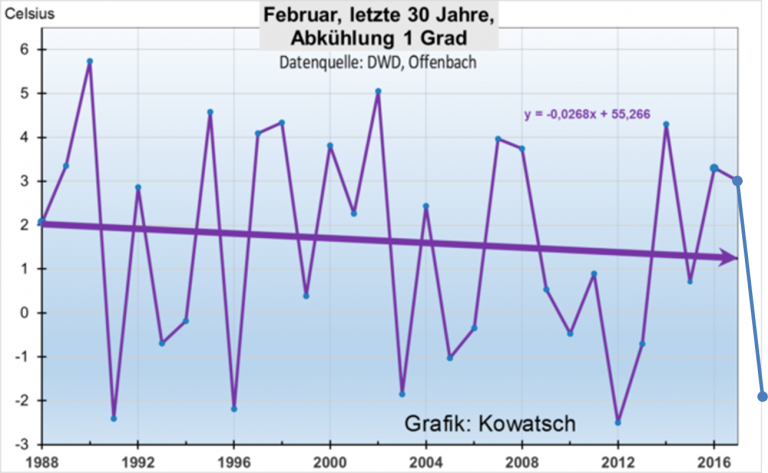 In the chart above, using the data from the DWD German national weather service, we see that the trend for February over the past 31 years in Germany is clearly downward.

Since 1988, the mean February temperature has in fact fallen about 1°C. That’s quite a surprise when we consider that it’s supposed to be getting warmer. Moreover, the data has not even been adjusted to take the urban heat island (UHI) into effect, Kowatsch says.

Well Seb, we’re already laughing. That’s a rather foolish statement you’ve made. You need to look at the data before expressing such strange things. We’ve already been waiting for the warming 31 years, and there’s no need to wait another 5 or 10 years. But do keep pushing it off if you like – eventually it will get warmer because of natural cycles.

But that’s just the month of February, and arguably one could claim cherry-picking here. The cold trend in February, however, indeed matters because it impacts when spring starts in Central Europe. Data on this as well show that spring has been arriving later over the past 25 years, and not earlier.

Now looking at the winter trend (D-J-F), here as well we see there’s been no warming over the past three decades: 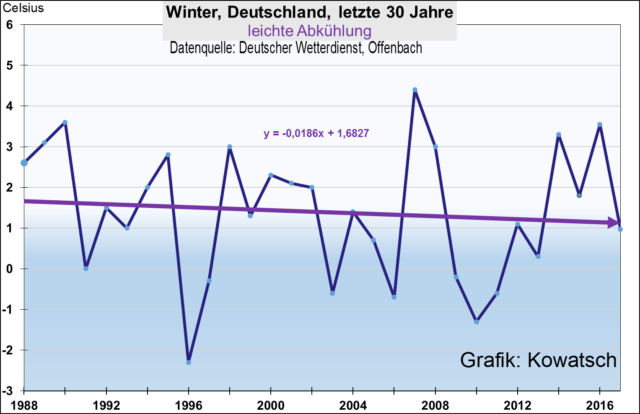 In neighboring Austria, the mean for February was also 2.0°C below the mean, according to Austria’s ZAMG national weather service here.

The ZAMG adds that in the mountains it was the 20th coldest February month since measurements began. Indeed Austria’s and Switzerland’s high elevation temperatures have cooled by a brisk 1.4°C over the past 30 years.

No warming in sight.